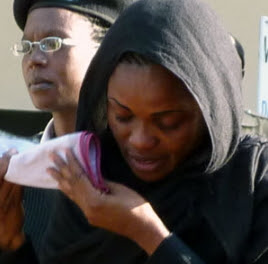 May 6, 2016 – Wife & Secret Boyfriend Sentenced To Death For Killing Husband In Ebonyi State

A housewife, Josephine Onwuzuruike and her secret lover, Ekene Onyeka have been sentenced to death for the murder of husband.

The suspect murdered her hubby at Azuiyiokwu area of Abakaliki back in 2008 and kept his body parts inside a cupboard after accusing him of attempting to marry another wife by building a separate house other than the one they were living. She, therefore, contacted Onyeka who joined her in killing the husband.

Justice Benson Ogbuh of an Ebonyi State High Court yesterday found the accused guilty of the offence and convicted them.

He sentenced them to death by hanging. During trial, Josephine, broke down and wept uncontrollable. She pleaded with the judge to be lenient on her because of her children.