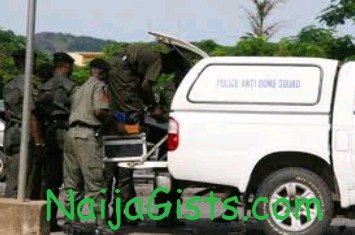 On Monday Oct 1st, 2012, Plateau State Police command defused a bomb that was placed at Ajayi Street in Kwararafa, an heavily populated area of Jos. naijagists.com

According to police report, the Improvised Explosive Device, IED was placed very to Jos Central Mosque by an unknown individual at about 10:10pm on Sunday.

Mr Emmanuel Abuh, the state’s police spokesperson said the suspect has been arrested and handed over to the Special Task Force.

Armed Robbers Attack Lagbaja’s House In Omole Estate, Lagos
Patriotic Nigerian Gets Coat Of Arms Tattoo On His Back