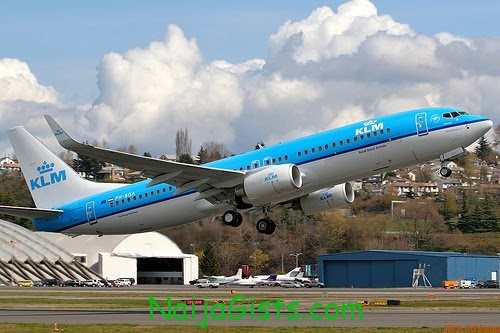 The three day strike by Nigerian workers over the removal of oil subsidy has taken its toll on the Dutch airline, the KLM.
It announced the cancellation of the scheduled flight out of Lagos today and also the return journey to Lagos from Amsterdam.

Also the flights from Amsterdam to Abuja and Kano to Amsterdam were also affected.

All the flights, KL 587, KL588 and KL 577, were supposed to take off today.
The airline said its decision to resume the flight will be dictated by the situation of things in the country.

“A transfer customer embargo is in place for customers booked to travel to and from Nigeria on 11th January 2012 . The embargo will be lifted when normal operations resume”, the airline said.

It also disclosed that it has offered voluntary re-book options to passengers ticketed to and from Lagos and Abuja/Kano between Monday, 9th January 2012 and Friday, 13th January 2012.