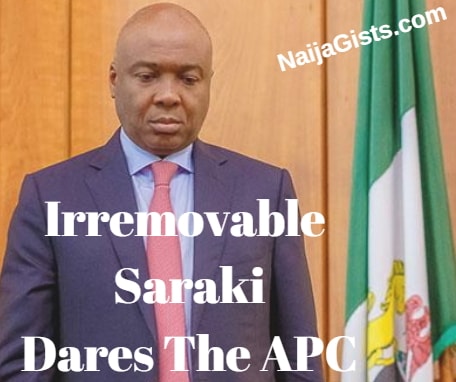 Bukola Saraki has urged the Chairman of the All Progressives Congress(APC), Adams Oshiuomhole to stop behaving as if he (Saraki) is the apparition haunting his life and the sinking ship that he captains.

He expressed surprise that Oshiomhole is behaving like a rain-beaten chicken, crying all over the place about Saraki.

“It is indeed amazing that the same Oshiomhole, who is now describing Saraki as a politician of no consequence was the same one who only a few months ago was crawling all over the place pleading for Saraki’s support to become chairman. We are sure that those who took him to Saraki several times to plead his case must now be thoroughly embarrassed by his reckless and uncouth manner.

“By his conduct and utterances, Oshiomhole, who accused Saraki of not acting in national interest needs to do more to convince Nigerians that his desperate desire to become party chairman is not simply to feed his oversized ego. The position of Oshiomhole and his cohorts in the APC that the Senate President must resign is a mere wishful thinking. They will continue to dream about their planned removal of the Senate President. They will need 73 Senators to lawfully remove Dr. Saraki and they will never get that in the present eight Senate.

Continue Reading
You may also like...
Related Topics:apc, pdp, saraki

Saraki Betrayed His Father & Sister Many Times, He Is A Mean Man With Selfish Interest – APC
The Unfolding Ambition Of Saraki, The Chameleon Of Nigeria’s Politics