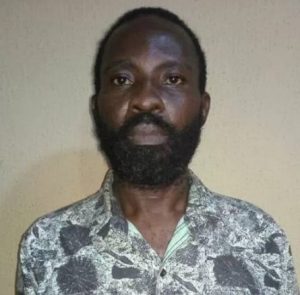 A vicious militant operating in Bayelsa state has met his end as IRT operatives stormed his hideout in a creek in Bayelsa yesterday.

The notorious kidnapper identified as Prosper David aka Militant General was killed in his hideout in Bayelsa state after he engaged security operatives in a gun battle from the ceiling.

The kidnap kingpin who had earlier surrendered his arms and enrolled into the Federal Government Amnesty programme later changed  his mind and started an underground militant group which collects N1 to 2 million from oil vessel passing through Nembe creek to the High Sea.

The suspect who has been under surveillance since last year December after he kidnapped a businesswoman, Tina Bob Manuel at her shop in Port Harcourt Rivers state was trailed to his hideout after police arrested his driver, Johnson Denis.

After Prosper David was informed of the arrest of his driver, he reportedly fled to an apartment in a creek in Bayelsa from where he was engaged in a gun battle and fatally shot.

Here is what his driver told police:

“I never knew he was into kidnapping. I used to drive his kids to school and I usually took him to Port Harcourt from Bayelsa. Each time we got to Port Harcourt, he would ask me to take the car back to Bayelsa. He has other drivers who drove him in Port Harcourt.

“So, on that day, when we got to Port Harcourt, he put me in a hotel and gave me N5,000. He took the jeep away and told me that someone would bring it the next day. Around 1:30pm the next day, a man brought the vehicle and I left for Bayelsa.

“On my way, I picked two ladies at University of Port Harcourt Gate. I used to do that whenever I dropped my boss so I can raise small money for upkeep. One of the women dropped on the way and while I was still with the second one, I had a flat tyre. We exchanged numbers and while I was trying to get the tyre fixed, I discovered the lady had put her simcard inside my boss’ phone she saw in the car. She said her battery was low and she needed to make a call.”

He added that his boss paid him N30,000 monthly as a driver.