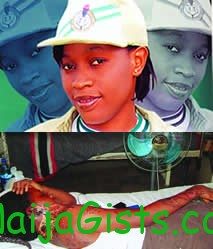 On Sunday the 22nd of April, 2012, an over-speeding car with plate no Abuja FT 490 ABC rammed into a lady and killed her along the Federal College of Education Technical, Asaba, the Delta State capital. naijagists.com

According to eye witnesses, the incident which occurred at about 6pm, was caused by over speeding by the driver of the car.

The witnesses said that as a result of the over speeding, the driver lost the control of the car, skidded off the road and rammed into the girl. She died immediately. The incident, it was learnt occurred two weeks before the deceased’s wedding.

The driver was rescued from the car unhurt by sympathisers.

The deceased, whose was identified as Miss Ifeyinwa Okeoma, was a member of the National Youth Service Corps (NYSC) serving at the Federal College of Education, Technical, Asaba. She hailed from Anambra State.

Speaking with National Mirror in tears, her colleague, who was brandishing the deceased’s wedding invitation card already distributed to friends, well wishers and others, described her as a promising and easygoing person.

The marriage was scheduled for May 5, 2012. Her body has been deposited at the mortuary of the Federal Medical Centre.