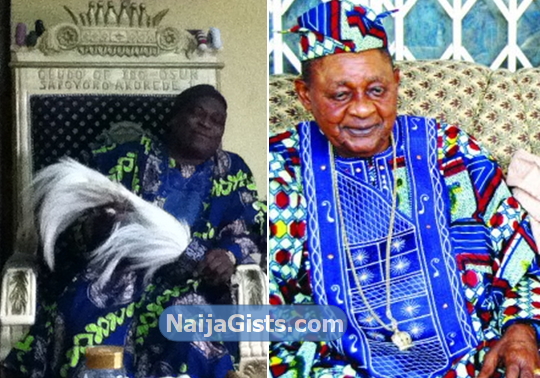 A popular traditional ruler in Osun State Nigeria, the Alayemore Olojudo of Ido Osun, Oba Aderemi Sapoyoro has taken a swipe at the Alaafin of Oyo, Oba Lamidi Adeyemi over his claim that Oranyan aka Oranmiyan never ruled Ile-Ife.

Oba Sapoyoro, who expressed shock at the Alafin’s claim, alleged that Oba Adeyemi lacked the basic knowledge of Yoruba history expected of a traditional ruler of his stature.

The Alaafin had during the grand finale of the 2013 edition of Oranyan festival in Oyo declared that the people of Ile-Ife could not lay claim to Oranyan.

Oba Sapoyoro who spoke in a telephone conversation with Daily Sun yesterday referred Oba Adeyemi to a book on the history of Ile-Ife written by Prof. Akinjogbin.

He said: “One of the revered authorities on the history of Yoruba land is the book entitled, ‘The History Of Ile-Ife’, written by Prof. Akinjogbin, and on page 255 of that book it is clearly stated that Oranyan was a monarch in Ile-Ife.

“Prince Oranyan came from the war front and arrived in Ile-Ife. Oranyan’s nephew, Obalufon Alayemore was the third Ooni of Ife before he moved to Ido-Osun and he later returned to Ile-Ife where he became the first Oonirisa of Ile-Ife.

Oba Sapoyoro, who is a close associate of the Ooni of Ife, Oba Okunade Sijuade, stressed further: “for any body to claim that Oranyan never ruled in Ile-Ife shows lack of knowledge of Yoruba history. It also shows that such fellow is shallow and naïve in the knowledge of yoruba history.”

The monarch urged the Yorubas to discountenance Alaafin’s claim and advised the prominent royal father to search for the truth about the Yoruba.