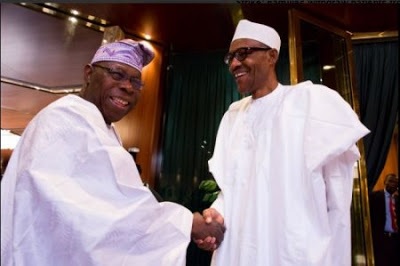 November 28, 2016 – Obasanjo Goes Against Buhari’s Plan To Borrow $30Billion, Says APC Must Get To Work

The fellowship spirit between Obasanjo and Buhari appears to be crashing like a pack of cards as the former, last week, took a swipe at the leadership style of the latter, saying that a lot of things still need to be done to get the economy properly back on track.

Obasanjo who spoke at the First Akintola Williams Annual Lecture, spared no words in his assessment of the Buhari-led administration, corruption in the judiciary and National Assembly.

Speaking on the theme:

“Nigeria Yesterday, Today and Tomorrow: Governance and Accountability,” the former president chided Buhari for persistently blaming past administrations for the nation’s woes.

He said the president was elected to effect changes, not to keep lamenting on the nation’s challenges. His words: “The blanket adverse comments or castigation of all democratic administrations from 1999 by the present administration is uncharitable, fussy and uninstructive.

Politics apart, I strongly believe that there is a distinction between the three previous administrations that it would be unfair to lump them all together. “I understand President Buhari’s frustration on the state of the economy inherited by him.

It was the same reason and situation that brought about cry for change, otherwise there would be no need for change if it was all nice and rosy. “Now that we have had change, because the actors and the situation needed to be changed, let us move forward to have progress through a comprehensive economic policy and programme that is intellectually, strategically and philosophically based.

I am sure that such a comprehensive policy and programme will not support borrowing $30 billion in less than three years. “It is easier to win an election than to right the wrongs of a badly fouled situation.

When you are outside, what you see and know are nothing compared with the reality. And yet, once you are on seat, you have to clear the mess and put the nation on the path of rectitude, development and progress, leaving no group or section out of your plan, programme and policy and efforts.

The longer it takes, the more intractable the problem may become.” On the need for Buhari to urgently fix the economy, Obasanjo said: “If we do not fix the economy to relieve the pain and anguish of many Nigerians, the gain in fighting insurgency and corruption will pale into insignificance. No administration can nor should be comfortable with excruciating pain of debilitating and crushing economy.

“Businesses are closing, jobs are being lost and people are suffering. I know that President Buhari has always expressed concern for the plight of the common people, but that concern must be translated to workable and result-oriented socioeconomic policy and programme that will turn the economy round at the shortest time possible. “We cannot continue to do the same thing and expect things to change.

That will be a miracle, which normally doesn’t happen in normal national economies. We have people inside and outside who can be brought together to help device the right economic policy and programme to get us out of the pit before we fall over the precipice into a dark cave. Economy requires a great element of trust to get it out of the doldrums, let alone out of negativity.

That trust and confidence has to be created.” He also kicked against Buhari’s request to borrow $30 billion, saying that going for a huge loan under any guise is inadvisable and it will amount to going the line of soft option, which will come to haunt us in future.

Continue Reading
You may also like...
Related Topics:Buhari, obasanjo, plan