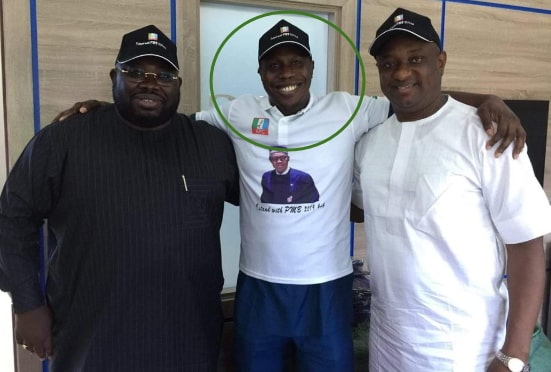 Mr Olujonwo Obasanjo, one of the sons of ex-President Obasanjo has joined President Buhari’s campaign team.

Obasanjo’s son had earlier expressed his willingness to work for the re-election bid of President Muhammadu Buhari.

In a letter addressed to Festus Keyamo who is the director, strategic communications of President Buhari 2019 Presidential Campaign, the son of the former president called on Nigerian youths to support Buhari.

He said the Buhari government is serious about the country’s development and called on all Nigerians to support him.

Olujonwo Obasanjo was pictured wearing a campaign shirt of president Buhari Alhaji as he posed with Nasiru Danu (The Dan Amarna of Dutse & Director of Logistics, PMB Campaign Organisation), and Festus Keyamo as he was officially received at the PMB Campaign Headquarters today in Abuja.

This is coming after Obasanjo said he has forgiven Atiku Abubakar, wholeheartedly, describing him as “president-to-be.”

Obasanjo said this while addressing journalists after the closed -door meeting with the Peoples Democratic Party presidential candidate.