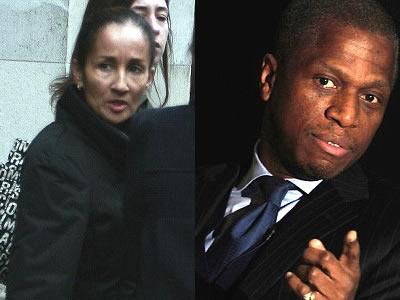 There are times you feel bad being a Nigerian because of many atrocities committed by fellow countrymen in foreign land. But this is a time for a Nigerian-born oil magnate, Michael Prest, to raise his head high up with the Green-White-Green flag across the streets of London because his native land’s law may save him from paying his ex-wife a huge divorce payout.

This is how Daily Mail Reported it:

“One of Britain’s most successful black businessmen is attempting to strip his ex-wife of a £17.5million divorce payout by claiming that under ‘native’ African law his oil company doesn’t belong to him.

Michael Prest, 50, was criticised by a senior judge last year for treating court proceedings ‘as a game’ by claiming to be £48million in debt instead of fabulously wealthy.

The High Court judge estimated his fortune to be at least £37.5million and ordered him to make the massive settlement.

The oil tycoon was also told to pay maintenance of £24,000 a year for each of his four children, along with their private school fees and medical bills.

The businessman and his ex-wife Yasmin, 49, have blown almost £3million in legal fees fighting each other after the bitter break-up of their marriage in 2008.

Now Mr Prest has succeeded in the first stage of his attempt to get the huge payout overturned by the Appeal Court. He has been granted permission to appeal by relying on Nigerian ‘customary native law’.

Mr Prest founded Petrodel Resources around ten years ago and in 2007 it was reported to have a turnover of close to £2.5billion.

But his lawyer Martin Pointer QC told the Appeal Court that a gift of £10,000 ‘seed money’ from his Nigerian father before he died in 1992 was the foundation stone on which his oil empire was built.

He said that under ‘customary law’ in Nigeria Mr Prest became head of the family with a responsibility to use his late father’s money to look after his four siblings and their children.

Mr Pointer argued his company’s assets did not belong to Mr Prest but were ‘held in trust’ for his children and those of his siblings under Nigerian law.

Mr Prest’s brother Michel has also launched a claim in the Nigerian High Court to declare that Petrodel Resources forms a part of their late father’s estate.

If successful, Mr Prest’s personal wealth would be dramatically reduced.

Mrs Prest has argued that Petrodel is ‘100 per cent owned and controlled’ by her former husband and has told the court it is effectively his ‘alter ego’.

The court heard Mrs Prest was born in England and grew up on the Isle of Man. She met Mr Prest, who was educated in Nigeria, in London and they married in 1993.

They lived in a £4million home in Bayswater, west London, and the oldest of their children is 14.

An £11.3million London property portfolio was also built up, with almost all the flats and houses being owned by one of Mr Prest’s numerous companies.

Mr Prest, who was named as one of the three most influential black men in Britain in 2007, argued that the Isle of Man-based company  Petrodel Resources should not have been included when assessing his ex-wife’s award.

Lord Justice Thorpe, sitting at the Appeal Court with Lord Justice Rimer and Lord Justice Patten, criticised Mr Prest’s ‘flagrant breach’ of his duty to disclose fully his financial affairs, as well as the ‘astronomical’ legal costs of the case. But he granted him permission to appeal ‘on the customary law point’.

Lord Justice Thorpe said: ‘The ownership of Petrodel is bound up with Nigeria and may be governed by customary law.’

Several of Mr Prest’s companies, including Petrodel Resources, are also appealing the divorce payout in their own right.

In the original High Court divorce case last October Mrs Prest claimed her husband was worth ‘many tens, if not hundreds, of millions of pounds’.

Mrs Prest had been seeking a payout of more than £30million, plus more than £730,000 a year for her and her children to meet their reasonable needs.

Mr Prest had offered her £27,000 a year and a lump sum of less than £2million. He claimed to have had no regular income for more than a year.

The family court hearing could not be reported, but details of the multi-million-pound divorce battle can now be disclosed as the case has gone to the Appeal Court, which is not subject to the same blanket reporting restrictions.

Mrs Prest sat at the back of the Appeal Court hearing with her lawyers and refused to comment.

No date has been set for the full appeal.

Mr Prest has managed to keep a low public profile despite achieving huge success in the oil business. He became a successful oil trader before forming his own company in 2001.”

This is one smart guy.