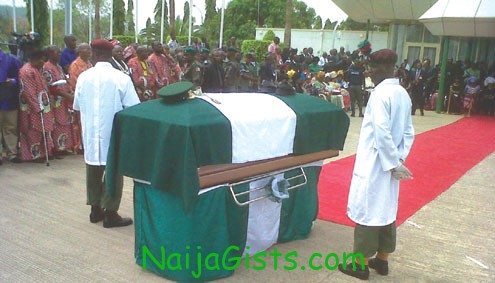 The body of the deceased Biafran warlord and Ikemba of Nnewi, Dim Chukwemeka Odumegwu Ojukwu has arrived in Nigeria. The remains of Ojukwu, who passed away on the 26th of November, 2011 touched down at the presidential wing of Nnamdi Azikwe airport in Abuja early morning. naijagists.com

The casket bearing the remains of the late Igbo leader, draped in Nigerian flag, was brought in aboard a British Airways flight around 4 am, and was received by the top government officials led by the Vice-President, Arc. Namadi Sambo, who represented President Goodluck Jonathan.

After the airport formalities performed by dignitaries like Dame Patience Jonathan, Senator David Mark and others, Ojukwu’s body was loaded into an aircraft enroute Owerri where his funeral rites is scheduled to begin ahead of his internment on Saturday.