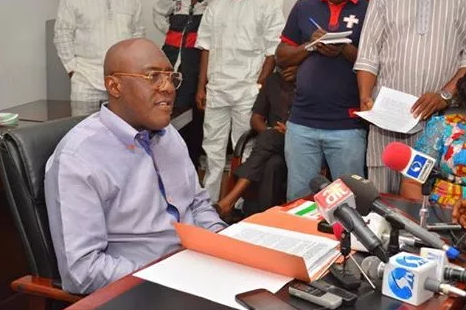 The peoples Democratic Party is yet to come to term that she is now an opposition Party, instead it continue to reduce it relevancy on daily bases as a result of uncoordinated attacks deployed by Olisa Metuh on the APC ruling Party, if he does not find fault in the way PMB dresses or laugh is either he accuses the APC of witch-hunting his party loyalists, forgetting that PDP is no longer in charge.

The last time I checked Olisa Metuh was to undergo some training with Lai Mohammed as regards constructive criticism, but surprisingly he still rant on every single issue without having his facts together.

Sadly enough, he tagged PMB latest trip Abroad as wasteful and of no economic importance. While this statement is childish and laughable, it is clear to the general public that Olisa Metuh is indeed an epitome of intellectual gabbage that requires serious mentorship, if not how on earth would a rational human being questions PMB marshal plan to tackling Boko Haram and recover our stolen funds scattered all over the world, of course Olisa Metuh and his PDP sleep and wake-up with corruption, and would not be happy to see such stolen wealth recovered and individuals found culpable brought to justice.

Could somebody please remind Olisa Metuh that the era of impunity and daylight looting of our National treasury is over? It is disgusting that PDP looters have no iota of shame left in them, because courtesy demands that they show some remorse to Nigerians having held this country hostage for 16 years.

Ironically, instead of apologizing to Nigerians for the mess they have subjected us to with regard to bad governance, hopelessness, corruption, perpetual darkness, unending strike in virtual in all our endeavours, infrastructural decay, moribund industries, dilapidating hospital and widespread discontent among Nigerians, they are busy playing irrelevant cat and mouse game .

Yes President Muhammadu Buhari trip to US may be regarded as fruitless because PDP looters are heading for a rock on account on mind-bugging revelation, it is a crime for the security apparatus to invite anybody for questions because he or she is a member of PDP, forgetting that her excellency Marilyn Ogar was the chief tormentor opposition Parties in Nigeria, alas! What goes around comes around.

How on earth could anybody imagine that a Party parading a Phd Holder of an incumbency with the largest political Party in Africa, which had boasted to dominate the spectrum of political scenery for the next 60years are now grabbing with a simple tutorial on constructive criticism? The answer to this was impunity and endemic corruption that pervaded the surface of Nigeria as it were, and until the likes of Olisa Metuh let go of his frustration on account of massive failure recorded in the last Election and learn the trade of constructive criticism with facts and figures, he shall continue to mislead his party to justify his fat salary.

I know for a fact that these looters have shamelessly collapsed their conscience but what is bad is bad as illegality can not be promoted under this government, for all I care his likes may shout to high heaven but the law shall always take its course no matter whose ox is gored.

Sometimes I wondered what kind of lessons these leaders are passing across to their children in justifying their illegality?

The task of rebuilding Nigeria is a collective responsibility of every patriotic Nigerian, of course criticism remains the beauty of democracy but in doing so it is advisable you place national interest above sentimental judgement, at best be constructive for posterity since no single individual is a monopoly of knowledge. Whereas, in unity and diversity Nigeria shall continue to grow.

Continue Reading
You may also like...
Related Topics:Buhari, olisa metuh