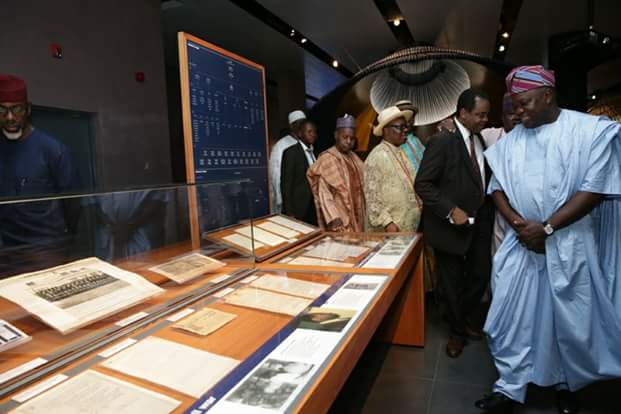 Speaking at the occasion, the Chairperson of the Economic Community of West-African states (ECOWAS), Ellen Johnson -Sirleaf, called on serving and former African presidents to establish presidential libraries as part of efforts to preserve the rich history of Africans.

The ECOWAS chairperson said the call had become necessary to enable Africans tell their stories from their own perspectives and avoid distortion of facts about their history.

Johnson-Sirleaf said that such libraries would help the governments to preserve records of their past for future generations.

She explained that such records would also strengthen the belief of the people in their past and present, as well as enhance their capacity to forge ahead to a glorious future.

The ECOWAS Chairperson commended former Nigerian president, Chief Olusegun Obasanjo, who is the chief promoter of the library for giving Africa its first presidential library.

“We take pride that this is our own history, made, recorded and also presented to us through this structure.

While calling on other African leaders to replicate the work in their countries, she called on youths in the region to make use of the library and also seek to challenge interpretations of past events.

Nigeria’s acting president, Prof. Yemi Osinbajo, in his remarks, described Obasanjo as someone whose destiny is intricately tied to Nigeria’s destiny.

He noted that he had been involved in major political happenings in the crucial moments of the nation from independence to date.

Osinbajo said that Obasanjo was one of the rare human beings who did not only have the opportunity to make history, but also lived long to document the history they have made.

“One great advantage of writing history is that it offers a sure way of preserving the lessons learnt from past failures and successes for the advantage of future generation,” he said.

The host governor, Sen. Ibikunle Amosun, in his remarks, said that the library, modelled after the American Presidential Library, would be a veritable source of intellectual materials for the socio- political development of Nigeria and the African continent.

“This complex has grown beyond the Olusegun Obasanjo Presidential Library to a community of its own class; where life is not only enriched but a centre of attraction for socio-economic, spiritual, educational and all-round human development,” he said.

The event was attended by some serving and former African presidents, governors, ministers and senators.

Others in attendance included diplomats, captains of industries, traditional rulers, academia, media practitioners and other senior Nigerian and global citizens.