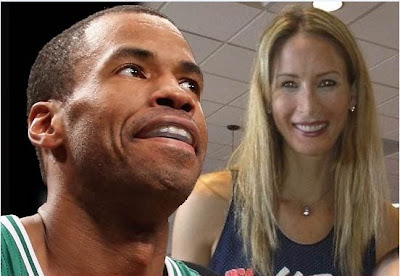 A popular NBA Player, Jason Collins who came open last weekend about his secret gay activities while keeping a straight relationship with his girlfriend Carolyn Moos didn’t tell her his secret before they broke up in 2009.

According to Jason Collins’s girlfriend, Carolyn Moos, she dated the NBA star for over 7 years, they got engaged and planning wedding when Collins ended their wedding plan.

Carolyn said she never suspected he was a gay man and this news about him is very shocking.

Last weekend, Jason Collins confessed that he ended his long-time romance with Carolyn over his feeling for a man.

“It’s very emotional for me as a woman to have invested 8 years in my dream to have a husband, soul mate and best friend in him.So this is all hard to understand.
I care about Jason tremendously and only want the best for him. I want Jason to be happy for a lifetime and stay true to who he really is,inside and out. – said Carolyn Moos in an interview.