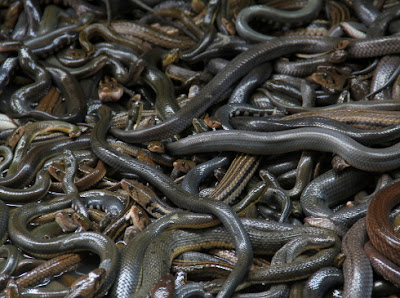 Mysterious appearances of snakes especially Cobras on streets and homes in Yenagoa, Bayelsa State capital is creating panic among residents.

Some persons attributed the development to consistent rainfalls and floods experienced in many parts of the capital city.

Others, however, said the underdeveloped nature of Yenagoa which has bushes, unkempt canals and many undeveloped plots of land provide safe haven for snakes and reptiles.

Residents of the Apex Academy road of Amarata community on Imgbi road at the weekend were said to have discovered a giant cobra in a vehicle and rallied round to kill it.

One of the residents identified as Chidera, said the cobra was discovered in a vehicle owned by a trader.

At about 7am, the owner of the vehicle, Emmanuel, called an auto repairer to fix the vehicle but discovered a large snake hiding in the vehicle.

“The man rushed to call some residents of the area to assist him. Some youths gathered and killed the snake”, he said.

Another resident identified as Joshua‎, said there have been movements of snakes around the Amarata since the rainfall started.

“Some weeks ago, I saw a huge snake at the back of my house in the morning. Attempts to kill the cobra failed as it was ready to strike”, he said.

But a local snake expert, Festus Ogienwon, advised residents to be careful while walking at night.

He further asked people to ensure their doors are tightly closed at all time to avoid snakes crawling into their apartments to hide.