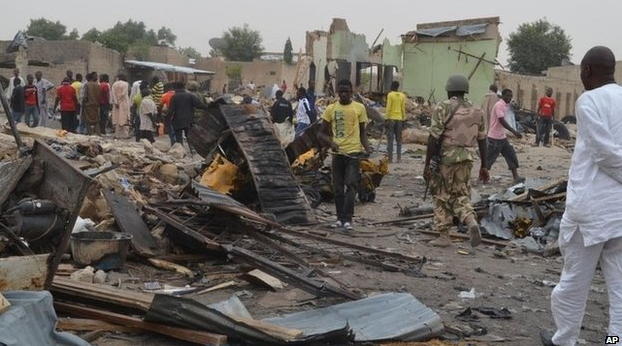 At least 30 worshippers Thursday died in a mosque bombed in and out by suspected Boko Haram agents in the outskirts of Maiduguri, capital of Borno State.

“All the people in the mosque died. Not a single one escaped,” said Muhtari Ahmadu, a trader near the scene, while another witness said he had counted at least 42 bodies after the blasts.

The bombed mosque was located in Molai, 10 kilometers south of the city. There were also reports of bombings outside the city. An Al-jazeera correspondent who was Molai had reported between 14 and 25 people dead. Accounts were still conflicting, because the bombings happened late in the evening.

“We started running up and down, motorists drove and rushed out of the area including Keke NAPEP riders with their families. Everywhere was confused and panic took over the entire place

A witness at the scene told Vanguard online, “Male Suicide bombers detonated multiple improvised explosive devices (IEDs) in different locations while over 30 Muslims were in one of the mosque at Molai outskirts of Maiduguri metropolis observing their Magrib prayer around 6.10 pm Thursday evening”.

” Muslim were just observing their maghrib prayers in a mosque at Molai then a heavy loud sound echoed the air and next we heard lucky survivors shouting it is bomb blast.

“We started running up and down, motorists drove and rushed out of the area including Keke NAPEP riders with their families. Everywhere was confused and panic took over the entire place.

“You need to see how residents were running, some even had to park their belongings and leave the area tensed and confused as nobody knows what will happen next, But we are yet to get the details of what happened and how many people were killed and how many were wounded.”