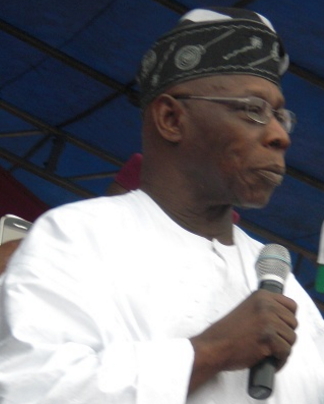 March 3rd, 2017 – “PDP Is Sunk & Gone, May The Fortune Of Nigeria Never Sink Like This Party” – Says Obasanjo At Opening Of His Library In Abeokuta

Nigerians, particularly members and supporters of the People’s Democratic Party (PDP) that are still hoping for a revived PDP someday, former President Olusegun Obasanjo has a word for them.

Obasanjo for the second time in less than three years, said the party is dead, sunk and gone, praying that the fortune of Nigeria should also not sink – apparently like that of the PDP.

Here is what the ex-president said at the grand opening of the Olusegun Obasanjo Presidential Library (OOPL), Abeokuta, to mark the 80th birthday of the ex-President on Wednesday

“Whether you believe it or not, today PDP is sunk and gone. May the fortune of Nigeria never sink like that of the PDP” with the audience responding in a thunderous “Amen.”

The opposition party has been going through time since alleged Boko Haram sponsor Alimodu Sheriff imposes himself as leader.

Continue Reading
You may also like...
Related Topics:nigeria, obasanjo, pdp