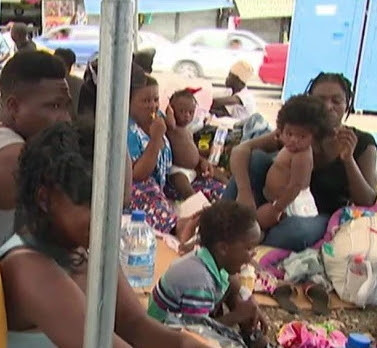 April 23, 2016 – Pictures: 600 Africans Travelling To The United States Of America By Boat Stranded In Costa Rica

Over 600 Africans are now stranded after crossing the Atlantic by boat to Brazil and then passing through Colombia and Panama before getting stuck in Costa Rica enroute to the United States.

With more arriving every day – so far from seven countries on the continent – to the small border town of Paso Canoas, both the Red Cross and the government have warned it could turn into a crisis.

“It’s been bad, a lot of police in Colombia, Panama asking for money. We haven’t had money for the bus and had to walk a long way,” Youleyni, a pregnant woman from the Democratic Republic of Congo, who travelled with her husband, told Al Jazeera.

Wilson Camara, identified as a leader of the group, told Al Jazeera they chose the arduous route because it had become very hard to get to Europe.

“There is a problem of terrorism and the borders are closed [in Europe] and so it is difficult. We, Africans, can’t get in. America’s easier to get to and seek refuge,” Camara said.

The route to the US, though, was also closed to them since the Costa Rican government will not let them move forward.

It says it is trying to plan a strategy since most of the people have no passports or other documents. 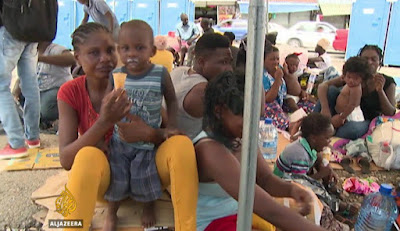 “There are a lot of options and meanwhile we will respect their human rights in a space where they cannot leave but which is not a jail.”

The people were now sleeping rough in a makeshift camp, surviving on food handouts.

The Red Cross said it was trying to help, but was worried about what would happen if the route through Costa Rica became a new mass migration trail.

“They could be changing their route from Europe and going to America and so we could have a humanitarian crisis if we don’t manage this right,” Luis Jimenez, a Red Cross representative in Costa Rica, said.

Continue Reading
You may also like...
Related Topics:Africans, boat, costa rica, traveling, us