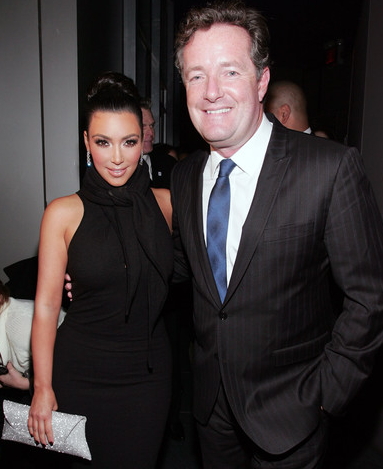 CNN anchor Piers Morgan has something to say to Kim Kardashian who shared a nake selfie on her official Instagram page yesterday. 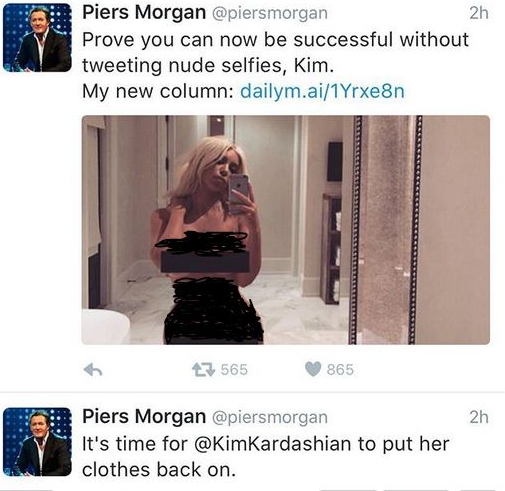 “My advice to those who think they have to take off their clothes to be a star,’ observed Mae West, ‘is once you’re boned, what’s left to create the illusion? Let ‘em wonder. I never believed in giving them too much of me.’

I thought of this when Kim Kardashian posted another internet-breaking nude selfie last night, showing off her voluptuous torso just three months after giving birth to her second child.

‘When you’re like, I have nothing to wear. LOL,’ she captioned the photo.

I chuckled, as I often do at Kim’s antics.

Of course, nudity has been a key part of her brand ever since she first burst into public consciousness via a leaked sex tape.

Since then, Kim’s ruthlessly exploited every crevice of her body in a way so spectacularly successful that it’s turned her into a multi-millionaire.

Until recently, I’ve had no problem with this. She works hard, has a keen eye for fashion and beauty lines, and has proven herself to be a skilled self-publicising marketer.

When she first broke the internet in 2014 by baring her champagne-dangling derriere for PAPER magazine, I defended her amid the inevitable ‘slut-shaming’ onslaught which instantly erupted.

I wrote then: ‘Kim doesn’t take drugs, get drunk, fall out of clubs, cheat on her man, or do any of the other insanely louche things that stars with far greater ‘talent’ often do. She’s good to her fans, and is by all accounts a good, loving daughter, sister, wife and now mom herself.’

My conclusion read: ‘Kim Kardashian-West’s laughing all the way to the bank. And all you lazy, snide, snobbish, patronising and hypocritical critics can go kiss her a*s – there’s plenty of room.’

But that was then.

After she tweeted her latest nude picture last night, I replied by saying: ‘I know the old man’s $50 million in debt, Kim (a jokey reference to Kanye’s preposterous recent claims of financial hardship) ‘but this is absurd.

Want me to buy you some clothes?’

I got off lightly.

Minutes later she ripped into Oscar-winner Bette Midler, who had also mocked her photo by saying: ‘Kim Kardashian tweeted a nude selfie today. If Kim wants to see a part of her we’ve never seen, she’s gonna have to swallow the camera.’

‘Hey @BetteMidler,’ snapped Kim, ‘I know it’s past your bedtime but if you’re still up and reading this send nudes.’

Her next tweet to Bette was brutal: ‘I really didn’t want to bring up how you sent me a gift awhile back trying to be a fake friend then come at me..’

But Kim’s real venom was reserved for 19-year-old actress Chloë Grace Moretz, who tweeted this response to the nude selfie: ‘I truly hope you realize how important setting goals are for young women, teaching them we have so much more to offer than just our bodies.’

‘Let’s all welcome @ChloeGMoretz to twitter,’ Kim sniped back, ‘since no one knows who she is. Your nylon cover is cute boo.’

All of this was a little odd since Kim’s usually very nice and polite on social media, in direct contrast to Kanye whose Twitter rants have grown steadily more insane and abusive in recent weeks.

In fact, the tone and wording of the tweets led me to suspect Mr West may have seized her phone, a fear exacerbated by another chest-beating exclamation which read, ‘Sorry I’m late to the party guys, I was busy cashing my 80 million video game check & transferring 53 million into our joint account.’

But until or if we hear otherwise, we must assume it really was Kim who’s now morphed into a bragging, taunting female version of her other half

In one final act of Kimye defiance, she unleashed a second nude photo with the hashtag: ‘#liberated.

I’m not so sure any of this is very liberating.

In fact, I found it all a bit depressing.

Kim’s 35 now, and the mother of two very young children.

She still looks fantastic, and of course has every right to post as many naked pictures as she likes. It’s her body, her life.

But it’s hard to escape the creeping suspicion that this new frenzied and frankly rather desperate attempt to ‘break the internet’ is happening because other younger members of her family have been grabbing all the scantily-clad attention recently, notably half-sister 20-year-old Kendall ‘Instagram Queen’ Jenner.

Every supermodel, movie and pop sex symbol (with the exception of the increasingly grotesque and embarrassing Madonna) knows there comes a time when you have to hand the baton onto the next generation, however reluctantly.

Nobody is a better illustration of this than Cindy Crawford, who still commands huge attention as a model but has moved to a less-flesh business model with great style, dignity and commercial benefit.

It’s not so easy perhaps when your brand is so indelibly linked to your own nudity, but it’s essential if you don’t want to fall into the trap of becoming an ageing parody.

That moment of truth has arrived for Kim Kardashian.

As Chloë Grace Moretz so rightly said, does she really want young girls to think the only way to succeed in life is by flashing their naked flesh in tweets to the gawping, salivating world?

She can surely be a far more powerful role model to them, and indeed to her own daughter North, by now proving she can be just as successful in other less prurient ways?

The time has come for Kim to consider the unthinkable and actually start putting her clothes back on.’”

A mother of two going naked on the social media for the world to see… Which mother in her right mind will do that??