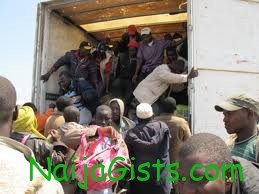 According to investigation revealed that the men arrived Lagos at night. When policemen accosted them, they could not give a satisfactory answer on their mission to Lagos State.

They were promptly arrested and taken to the headquarters of the Lagos State Police Command, Oduduwa, Ikeja.

According to a police source, a Deputy Commissioner of Police in charge of operations in the state command, DSP operations, Mr. Tunde Sobulo has been assigned to investigate the activities of the aliens.

It’s gathered this morning that the foreigners will soon be handed over to officials of the Nigeria Immigration Service, NIS for further interrogation.

Contacted, the Lagos State Police Command Public Relations Officer, PPRO, Samuel Jinadu, a Deputy Superintendent of Police, DSP confirmed that there was suspicion about the mission of the Nigerians in Lagos and that they are being investigated at the State Police Headquarters.

He added that so far, nothing incriminating has been found on them.

However, he said the Nigerians will be repatriated at the conclusion of police investigations.

In the wake of bomb blasts by the Boko Haram fundamentalists across northern states, security has been beefed up in Lagos State to prevent the sect from infiltrating the state. naijagists.com

After the Christmas Day bombing that left scores of people dead at St. Theresa’s Catholic Church in Madalla, Niger State, Lagos State Governor, Babatunde Fashola has urged residents of the state to be vigilant and more security conscious.(pm news)