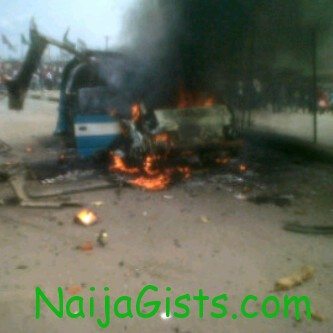 A bomb explosion inside a commuter bus painted in Rivers State colour this morning exploded at Rumuokoro roundabout which is the gateway into Port Harcourt , the state capital, a usually busy place. naijagists.com 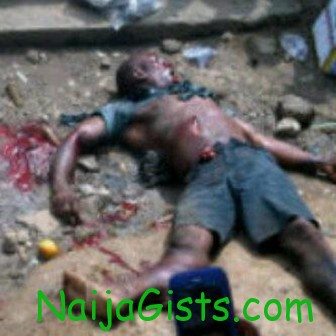 One of the victims at the blast scene.

As at the time of this report, 3 people have been confirmed dead while others who were seriously injured have been rushed to the University of Portb Harcourt Teaching Hospital.

According to an eyewitness, the bus ran out of gas while two other persons were pushing it when the explosion occurred. The vehicle was seriously damaged.

The police anti-bomb squad of the Rivers State Command led by the Commissioner of Police, Mohammed Indabawa was at the scene of the incident and cordoned off the place.

The scene of the explosion is a busy terminal where commuter buses discharge passengers from various states and pick same to various destinations.

The police are presently investigating the cause of the explosion. A police source at the scene said an AK 47 rifle was found in the bus.

There was panic among the residents of Port Harcourt, the state capital and its environs in the wake of the explosion.

The state police command was yet to brief journalists on the cause and extent of damage caused by the explosion as at the time of filing this report.

The state governor, Rotimi Amaechi told Channels Television after the explosion that it was not a suicide bomb attack as being bandied around by some residents.

He confirmed that an explosion actually occurred inside the bus and that the driver of the bus died on the spot while two other occupants were severely injured and rushed to the hospital.

Amaechi said it was like an armed robbery operation gone wrong, insisting that it was not a bomb explosion.

There was a heavy traffic jam in the area because the busy Rumuokoro roundabout where the explosion occurred was cordoned off.

A petrol filling station and a new generation bank are located near the scene of the explosion.