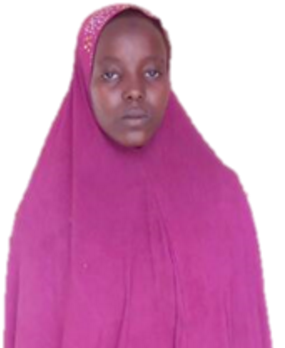 An ex-wife of the factional leader of Boko Haram, Mamman Nur has been arrested by the Nigeria Security and Civil Defence Corps, Borno State Command.

The teenager, Fatima Muhammad Kabir was one of the two teenage suspected suicide bombers paraded before journalists by the NSCDC in Maiduguri on Tuesday.

Fatima Muhammad Kabir, aged 15, had once married Mamman Nur as one of her three husbands in two years while she was held by Boko Haram insurgents in Sambisa forest.

Now four months pregnant, Fatima was said to have tested positive to HIV, according to the NSCDC Commandant, Ibrahim Abdullahi during the briefing at the NSCDC Command Headquarters, Maduganari area, Maiduguri.

Speaking with journalists, Fatima confessed that she was Boko Haram leaders’ wife thrice within two years and claimed that she hailed from Gwoza town.

She said she was abducted by the insurgents two years ago in Gwoza when they captured the town and she was taken into the Sambisa forest.

“I am an indigene of Gwoza town. One day Boko Haram stormed our town, killed many people and kidnapped me. Since then, I have been living in the dreaded forest and married to one Boko Haram commander to another. I was tired of that horrifying life, so, one day I resolved to flee. As I was running, I saw a team of military men and quickly rushed to them and narrated my ordeal.”

“They sympathized with me and took me to their colleagues in Gwoza, who in turn conveyed me to Kano motor park in Maiduguri and gave me the sum of N3,000. they said I should use it for food and transport to look for my parents in one of the camps for the Internally Displaced Persons. So while staying there, the night fell and I became stranded with nowhere to go, some operatives of the civil defence apprehended us and took us here,” she narrated to journalists.

Fatima further revealed that after her marriage to the factional leader of Boko Haram, she was married to two other Boko Haram leaders, who later abandoned her and fled from the Sambisa forest.

The other teenage girl, Amina Salisu, 14, was also arrested alongside Fatima. She corroborated Fatima’s narrations that they were all forcefully married to different husbands at the Sambisa forest but her two husbands were killed by the same Boko Haram leaders during squabbles and abandoned before she was later married to another insurgent about 44 days ago.

She disclosed that she escaped from Sambisa forest with Fatima through the bush to reach Gwoza and reported themselves to the military in Gwoza town. She said she and Fatima were taken to Maiduguri by the brother of her third husband living at Damaturu.

She said they were arrested at the Borno Express Motor Park in Maiduguri by NSCDC officials when some motor park officials reported them.