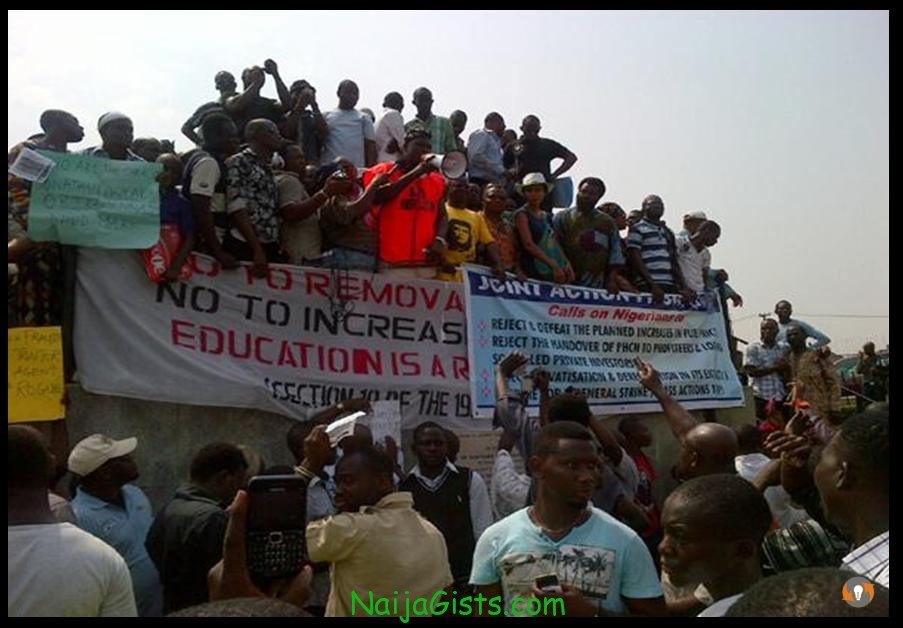 A coalition of Civil Society group yesterday accused President Goodluck Jonathan of declaring war on Nigerians  through the removal of fuel subsidy. naijagists.com

In a statement entitled “Subsidy removal is a declaration of war on the Nigerian People”, the Coalition said the Jonathan government has not been truthful on the reason behind its decision to remove the fuel subsidy.

They demanded the immediate repair of the existing refineries.

It reads: “The decision of the President of the Federal Republic of Nigeria to remove  the subsidy on petroleum products on New Year’s Day is insensitive,  callous and a declaration of war of starvation on the Nigerian people.

“The decision has left thousands of Nigerians who travelled home for the Christmas and New Year’s holidays stranded in their hometowns and villages in different parts of the country. This is because most of them cannot afford the increase in rates being charged by motorists.

“It has also left the Nigerian people despondent, afraid and nervous at what the future holds for them given the irresponsibility of the political elite and their penchant for aggravated mismanagement of the Nigerian economy.

“Since the President has, in the face of massive opposition, gone ahead to implement a policy that he knows will lead to the destitution and death of thousands of the Nigerian people it has become urgent and imperative for us as leaders in our various organisations, representing a broad spectrum of the national civil society movement, to issue this statement restating our position on the issue.

“The Nigerian economy has been in a continuous crisis for years now. This crisis is the result of a number of factors, including the poor management of the economy by the government, corruption and the unfavourable positioning of the economy in the global space. Rather than tackling the economic crisis in a holistic manner, the government has instead focused on tinkering with the economy through its fixation on the removal of fuel subsidy.

“We note that government has not been transparent and honest in its disclosure about the determinants, management and utilization of previous fuel subsidy funds and cannot be trusted with the management of the present one.

“Government has, while acknowledging that subsidy fund has been cornered and misused by a cabal failed to bring those guilty of misusing and misappropriating the fund to face anti-corruption laws due to the fact that a large number of those in government are part of the cabal and complicit in the mismanagement of the funds and the Nigerian economy.

“Government has been and continues to be insensitive to the plight of the ordinary people of Nigeria by asking citizens who have been groaning under increased and increasing hardship to make additional and back breaking sacrifices while government officials wallow in obscene opulence and are not called upon to make similar sacrifices in the form of reduction in their salaries, allowance and other perquisites of office.

“The sense of lack of money that has gripped the government is the result of unbridled and unconstitutional juggling of the commonwealth of the Nigerian people for electioneering purposes and the lack lustre fight against corruption. It is noteworthy that the Federal and State Governments started talking about the collapse of the Nigerian economy shortly after using public funds to fund their elections and re-elections.”