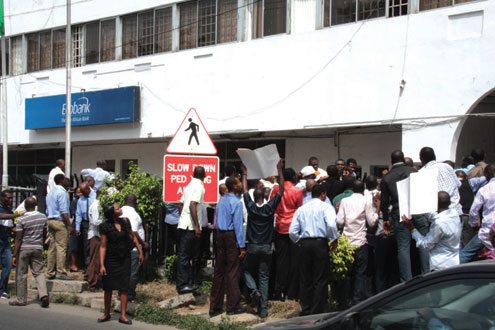 Activities at Oceanic Bank Headquarters and all its branches in Lagos State, Southwest Nigeria were paralysed Friday following the decision of the new owner of the bank, Ecobank to pay the disengaged staff paltry sum of money as severance package.

The headquarters of Oceanic Bank on Ozumba Mbadiwe Street, Victoria Island, was shut following protest by disengaged staff rejecting the severance money offered them by the bank.

We gathered that hundreds of staff of the former Oceanic Bank, which were recruited by Oceanic Security have been laid off.

Policemen took over the gate of the Oceanic Bank Headquarters as staff protested the proposed poor severance package Ecobank intends to pay them.

What this means is that workers who have spent eight years working for the former Oceanic Bank will take home a paltry N320, 000 for all the years spent working for the bank.

The workers said they would only agree to be disengaged if adequate package was paid them, while rejecting what they called peanut offered by the bank to them.

Also, as at this morning, almost all Oceanic Bank branches were shut to workers and customers as customers could not withdraw or deposit any money as a result of the crisis rocking the bank.

The Oceanic Bank branches at Secretariat, Alausa; Amuwo-Odofin and others were shut, while security officers turned customers back.

A staff of the bank, who craved anonymity, said activities had been completely paralysed in all branches of the bank, including the headquarters taken over by policemen.

He said the management of the new bank offered to pay the workers a paltry amount of money as severance allowance, saying that it was completely unacceptable.

According to him, Oceanic Bank had about 300 branches and that staff recruited by Oceanic Security in most of the branches had been laid off, while the new owner had brought in its own staff to occupy the positions of the disengaged workers.

Another staff of the bank, who also craved anonymity, told news crew that the severance package proposed by the new owner of the bank was too small, saying that those laid off could be in thousands.

When contacted, the Corporate Affairs Manager of Ecobank, Michael Joseph said he could not speak for the Managing Director, saying that the bank would soon issue a press statement on the matter.

There are fears that more workers will lose their jobs in the wake of banking reforms and mergers.