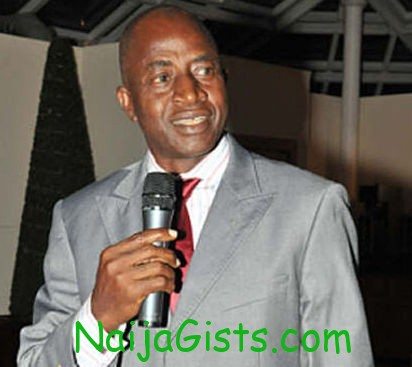 Following the shocking death of former Nigerian Super Eagles star, Rashidi Yekini few days ago, ex-Nigerian international, Segun Odegbami, MON, alleged in a stunning interview Friday on Channels Television that former African Footballer of the Year, Rashidi Yekini might have been killed by those who forcefully took him away from his home.

Odegbami also called on the Inspector General of Police, Mohammed Abubakar to probe what led to the reasons the late Yekini was chained and taken away from his residence by unknown people.

The former captain of the Green Eagles of Nigeria opined that the former Vitoria Setubal of Portugal striker was sane but depressed after losing a huge sum of money in a business deal.

He opined that the deceased, who scored Nigeria’s first goal at the World Cup in 1994, was a recluse, stating that when some people alleged that he was insane and took him to the police station, they were rebuffed by the Commissioner of Police in Oyo State.

“Is it a hospital or herbal centre? Why did they take him there? There was absolutely nothing wrong with Rashidi. You’ve been hearing stories and all kinds of reports about Rashidi being mad, walking the streets of Ibadan and all those things, saying he was abnormal. Who would have done normal things, if you lost your fortunes the way he did? He suffered huge financial loss, about two years ago and because he didn’t have any friend.”

Odegbami, who has just returned from Harvard University, USA where he had attended a conference, added: “he could not even share his pains and burden with people. He could have committed suicide but he didn’t. Rather, he behaved abnormally for a while and that was the cause of his depression and it was something that time has healed because the Rashidi I saw was okay.”

He further argued: “how could an insane person drive a car? Rashidi and I met at Onireke Guest House. He carried me in his car, just the two of us and we sat for over one hour. He unburdened his challenges to me and he decided that from now onwards that Rashidi was going to get back into the limelight.”

Odegbami also disclosed that plans were in top gear by First Bank of Nigeria to make the late striker of Gateway Football Club of Abeokuta an ambassador, where he would distribute 5,000 balls to young footballers and when the late striker heard that his eyes lit up.

According to P.M report, Segun Odegbami, who owns The International Academy, TIA, Wasimi, Ogun State spoke about the planned programme with First Bank. “I was not going to arrange interviews for you, where people will laugh at you. The plan was to make you do what you know how to do best, play football, train with kids, distribute balls to kids,” Odegbami said he told Yekini.

He also disclosed that SuperSport were interested in what was happening to Yekini and when they heard First Bank was about to make him an ambassador they tried to do a documentary on him.

On how he heard of the demise of the former striker, Odegbami said: “I came back from Ethiopia, called his mobile phone but it didn’t go. I called one of his friends, Bayo and he said he too had been calling Yekini but, no response. It was a premeditated death. Who were those that went to take him away? Why did they take him away? If he was ill, who certified that he was ill? He played football on that day, he was driving his car, he was not disturbing anybody. He had his own problem. Rashidi had always been a recluse, even when he was playing for Nigeria and getting all the awards and everything. Rashidi was not somebody that you will find in the party, he never smoked, he didn’t care about material things.”

Odegbami spoke on how Yekini was abducted by some people after he parked his car, arguing that those behind his abduction must be fished out.

“His neighbours said they saw two spiritual people, one was a relative, the other very close to him. They said they wanted to cure him or something and the police had said that when Rashidi had this depressive problem, they took him to the Commissioner of Police and the commissioner told them that ‘it was you people that have problems not this young man that I’m seeing. Nobody should take him anywhere without the presence of the Police,”

Segun Odegbami called on the Federal Government and the National Sports Commission, NSC, to pay closer attention to ex-sports people because a lot of them have been forgotten after winning laurels for the country.