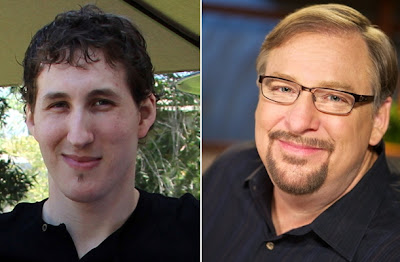 The statement paid tribute to Matthew Warren as “an incredibly kind, gentle and compassionate young man whose sweet spirit was encouragement and comfort to many.”

In a letter to Saddleback staff from Rick Warren, which was released by the church, the pastor said his son had taken his life after suffering “a momentary wave of despair at his home.”

“Only those closest knew that he struggled from birth with mental illness, dark holes of depression, and even suicidal thoughts,” Warren wrote.

“In spite of America’s best doctors, meds, counselors and prayers for healing, the torture of mental illness never subsided.”

Around 20,000 people attend the church every week, while Warren has a high national profile in the United States.

In the 2008 election he hosted a forum for presidential candidates John McCain and Barack Obama, before later giving the invocation at Obama’s inauguration in January 2009.