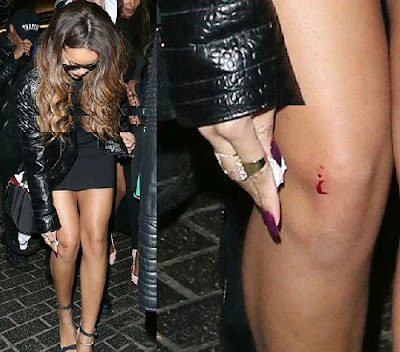 On Saturday night in London, a mad fan who reportedly got angry over Rihanna and Chris brown threw a bottle of Lucoade, British softdrink at her while ranting some undisclosed words about Chris Brown.

The bottle hit Rihanna and she fell into a metal case which sliced open her leg with blood gushing out.

Rihanna’s body guard quickly went after the angry fan who is still on the run.

The bodyguard suffered minor cut and was taken to a London hospital where he was later released.

The angry fan who caused the above episode is still on the loose.