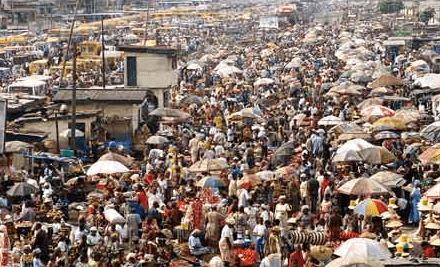 The popular Ehi Road chicken market in Aba, Abia State has reportedly been invaded by some daredevil armed robbers dispossessing traders of huge sum of money and other valuables.

It was gathered that the market which is located at the back of the Christ the King Cathedral (CKC) in the heart of the commercial city was raided by gunmen numbering ten.

Sources at the market told our reporter who visited that the robbers invaded the market in three tricycles and started shooting sporadically leaving sellers and buyers scampering for safety.

According to one of the traders who gave her name as Ngozi Ezekwere, the robbery lasted for just five minutes which saw the robbers made away with all the money made by the traders on gunpoint.

“I was one of those robbed. They took my N150, 000 and I also lost seven of my chickens worth N3, 000 each at the process because when they came, both humans and fowls were seeking for places to hide.

“They injured many persons here as you can see the market is a little empty today. A man who specializes in killing and preparing chicken for customers was almost burnt alive by the gas cooker he lighted before the robbers came.

“The boiling water he placed on the gas burner almost destroyed his skin. It was the worst experience of my life. But I thank God they only took my money not my life.”

Narrating his own ordeal, Ifechukwu Onwujekwe said he was lucky as to escape with his remaining chickens as he barely sold little before the robbers invaded the market.

“I was lucky because most of my fowls were still in the cage where I kept them. All I did was to confidently push my truck without looking back.

“I didn’t fear stray bullet, but I admit I was lucky because I saw some persons injured and so many robbed of their hard earned monies.

“The police only arrived about ten minutes after the robbers left.”

When contacted, the Abia state Police Public Relations Officer, Mr. Geoffrey Ogbonna told our reporter that he is not aware of the robbery as he has not been informed of it.