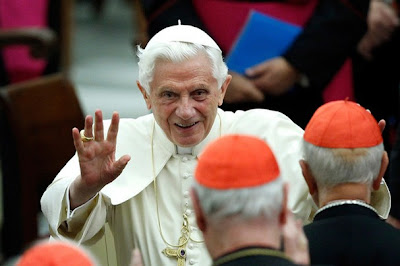 During a meeting with Vatican cardinals today, Monday the 11th of Feb, Pope Benedict XVI made known his intention to officially tender his resignation letter.
The 85-year-old pope is resigning over his deteriorating health.

He has made history as the first pope to resign nearly 600 years after Pope Gregory XII stepped down in 1415.

Here is what he said in the meeting today:

“After having repeatedly examined my conscience before God, I have come to the certainty that my strengths due to an advanced age are no longer suited to an adequate exercise of the Petrine ministry,” he told the cardinals. “I am well aware that this ministry, due to its essential spiritual nature, must be carried out not only by words and deeds but no less with prayer and suffering.

“However, in today’s world, subject to so many rapid changes and shaken by questions of deep relevance for the life of faith, in order to govern the barque of St. Peter and proclaim the Gospel, both strength of mind and body are necessary – strengths which in the last few months, has deteriorated in me to the extent that I have had to recognize my incapacity to adequately fulfill the ministry entrusted to me.”

The new pope is set to elected March ending.