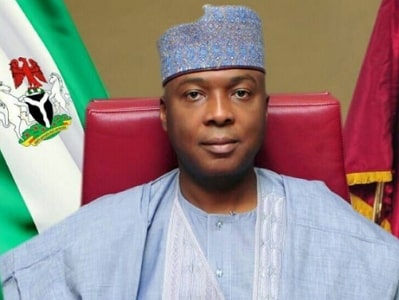 Saraki Presidential Ambition Is A Joke, He Is A Selfish Politician & Abysmal Failure Totally Incompetent To Run As President – APC

The APC has released a statement to discredit Senate President Bukola Saraki who is planning to become the next President of Nigeria.

The All Progressives Congress party said today that his aspiration is a mere joke that should not be taken seriously.

“At last, the Senate President Dr. Bukola Saraki has declared his intention to run for the Presidency of Nigeria. While the All Progressives Congress (APC) welcomes him to the race as it is his right to do so as a Nigerian Citizen, there are however many issues that border on his integrity, antecedents, competence and capability to preside over the affairs of the country.

“Meanwhile, we are not unaware of reports that Saraki’s presidential declaration is his tactic to deflect attention from the deluge of issues he deals with particularly ahead of the 2019 General Elections i.e. pressure to reconvene the National Assembly, a fast shifting political order in Kwara State, among others.

“Saraki in his declaration speech stated among others:
• I have decided to heed the call of teeming youths who have asked me to run for the Presidency.
• I have what it takes to secure inclusive growth for Nigeria.
• I will address our infrastructural deficiency through aggressive financial initiatives.
• Our fight against corruption will be on deterrence.
• I offer leadership driven by empathy.

“On these few points, we are mindful of the popular axiom: “By their fruits, we shall know them”. By virtue of Saraki’s antecedents, he is an abysmal failure and is totally incompetent to offer himself as a candidate for leadership of Nigeria.

“As Kwara State Governor, was his Shonga Agricultural Programme not a white elephant project in which hundreds of millions of State funds was sunk into? “The infrastructure, particularly roads network in Kwara State in which the present administration remains under his tight grip and political machinations long after leaving office, remains deplorable while state resources is mismanaged through corrupt enrichment.

“A Presidential aspirant, who promises to create jobs and turn around the economy at the national level, must have done so in a state he served as Governor for eight years. We challenge Saraki to give the nation his scorecard as a Kwara State.

“As Senate President, how Saraki used the position to superintend over budget padding, sabotage of the executive by frustrating confirmation of presidential nominees, stalling legislative approvals for election budgets and his recent shadow boxing on the Electoral Act, among other treacherous actions against the APC (which he was then a member) in pursuit of his selfish political interests has been well reported.

“Was Saraki’s Senate Presidency not a journey of shame and disgrace? – moving from one Court or Tribunal to another over charges of forgery of Senate Rules, false declaration of assets, and being linked with armed robbers who brutally killed and maimed innocent residents in Offa recently.

“Saraki says he is heeding the call of Nigerian youths to contest the Presidency. We are not aware of any meeting of Nigerian youths held during which they decided that. For the record, the #NotTooYoungToRun group berated Saraki for selfishly using their forum to make his presidential declaration.

“We are not surprised by Saraki’s selfish actions as it has come to define his politics and persona. Saraki says he will offer leadership driven by empathy. Coming from an incredibly selfish and self-opinionated politician this is indeed an irony.

“Saraki’s Presidential aspiration is a huge joke and should not be taken seriously. He has repeatedly displayed his character as extremely selfish, deceitful, untrustworthy and unreliable. His only goal is to get to the top, stay at the top, ruin or wreck whatever he finds there or in the event of failure, collapse the system or process.

“Nigerians have had enough of Dr. Bukola Saraki’s retrogressive and disruptive style of politics and deserve no more.”

Continue Reading
You may also like...
Related Topics:apc, failure, saraki