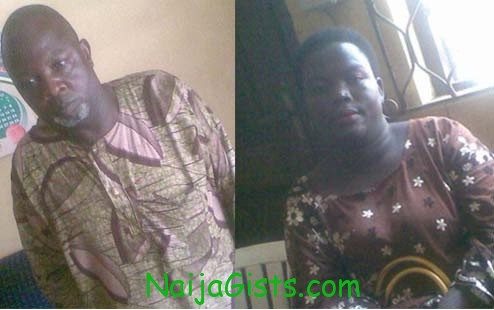 Akinwale Ayinde Sodiq (LEFT), accused his wife, Kashimawo (RIGHT), of starving him of sex since he was involved in an accident six years agoA vulcaniser has asked an Otto-Ijanikin Customary Court, Lagos, Southwest Nigeria to dissolve his marriage to his wife because she starved him of sex for six years.

The petitioner, Akinwale Ayinde Sodiq, accused his wife, Kashimawo, of starving him of sex since he was involved in an accident six years ago.

He told the court that the accident which paralysed parts of his body, including his manhood, prevented him from being able to satisfy his wife sexually and this led her into engaging in extra marital affairs.

The tragic incident, according to him, occurred in June 2005 while they were traveling to his home town in Oyo State. The divorce-seeking husband narrated amidst uncontrollable tears, the rejection and anguish he went through in the hands of his wife.

Recounting how it all began, the father of four narrated: ’’I got married to Kashimawo at 26 just like every other man. Although I wouldn’t say our marriage was rosy because there is nothing like a perfect marriage, but we resolved our minor quarrels amicably. In the course of our living together, I observed that my wife likes money too much. She is easily carried away by material things.

“Trouble began in 2005 when we were involved in a ghastly road accident on our way to my home town. After the accident, I lost consciousness but was revived days later. Later, I discovered that some parts of my body were seriously affected. I couldn’t move my legs and hands. After my discharge from the Lagos University Teaching Hospital, LUTH, I was taken to a local bone healer for treatment,” he said.

“When I returned from the hospital, my wife worsened my predicament by making life uneasy for me. She was fighting me always over minor issues. Anytime any of the children tried to intervene, she would beat the hell out of him or her.

“The most recent fight she had was with our last born, a 15-year old girl. Yemisi confronted her for daring to hit me and a big fight ensued. Not satisfied with beating the girl, Kashimawo went ahead and set the girl’s clothes ablaze.”

Sodiq told the court that the most painful part of his experience was his inability to have sex due to the damage of his manhood caused by the road mishap.

But luckily for him, he disclosed that he started feeling a bit of life in his pelvic region as the bone healer kept massaging his body. This later resulted into having erections months later. Although a weak one but he was eager to quench that burning desire for sex he had endured for long.

“For the first few months, my wife was responding to my desire for sex. Whenever I felt a little nudge in my manhood, I quickly called on on my wife for a little intimacy. We managed the weak erection to our best satisfaction. But along the line, she started withdrawing and was no longer giving me the attention I sought.

“When I confronted her, she bluntly told me that my half-dead manhood can no longer satisfy her, it only tickles and leaves her high and dry. Consequently she would no longer grant me my conjugal rights. All pleas to make her pity my predicament fell on deaf ears, as she callously insisted on starving me of sex. It is over six years now since I had an erection, not to talk of having sex.

“As if that wasn’t enough, I have been hearing rumours of her illicit romance with other men and sleeping with young boys on our street. Some of them even have the guts to come looking for her in our shop in my presence. Each time I confronted her and her evil deeds, she would abuse me, calling me all sorts of names. I am fed up with everything and can no longer cope.

“Therefore, I urge this court to grant my prayers for the formal dissolution of this marriage to save me from untimely death and help me secure the future of my kids,” he concluded. Responding to the allegations, Mrs. Kashimawo Akinwale accused her husband of being the cause of their marital crisis due to his recent predicament. The middle-aged woman claimed that her husband’s hot temper and suspicions were the obstacles to peace in their home.

“I agree that I have not been satisfying my husband sexually, but he is not helping matters at all. He gets easily irritated and was always angry.

“Based on his problem, his family abandoned him to his fate, but that notwithstanding, I still love my husband,” she told the court.

After listening to both parties, the president of the court, Chief S. K. Hussein tried to broker peace between them but all his efforts were rebuffed, as the petitioner had made up his mind to divorce the woman.

The union was formally dissolved and N28,000 was awarded to the respondent for maintenance. Both parties were advised to maintain the peace.(pm news)