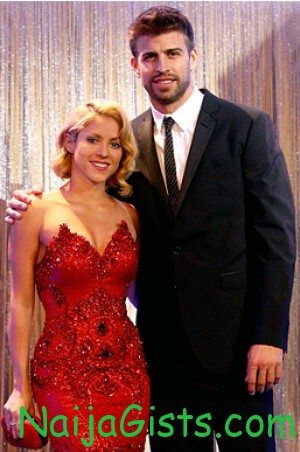 Singer Shakira who recently announced she is pregnant for her footballer boyfriend has put to bed in a bizarre prank initiated by her boyfriend, Gerard Pique on Twitter. naijagists.com

Shakira’s boyfriend, Gerard made this exciting announcement via his Twitter page few hours ago.

Shakira who came into limelight in the early 90’s has been at the peak of her career since then. She was born and brought up in Barranquilla, an industrial city located in Northern Colombia near the Caribbean sea.

Shakira and Gerard Pique welcome their first baby boy together on Thursday December 27, 2012 in a Twitter prank.

Gerard Pique who is soooo excited about the arrival of their virtual first baby  shared the prank few hours ago via his Twitter page and it reads:

“Our son is already born! We are very happy! Thank you all for your messages”

Before we start congratulating them, it has been confirmed that it’s just a hoax from Gerard Pique aimed at fooling unsuspecting fans.