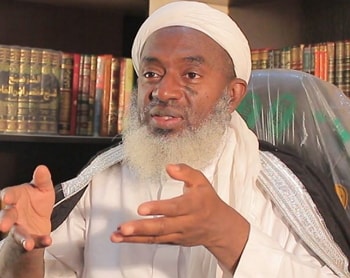 A popular Islamic cleric based in Kaduna has urged the Nigerian military to hire willing Islamic clerics to combat Boko Haram the proper way.

In a chat with Daily Trust yesterday, the cleric said if the Military can establish a Muslims legions within the Nigerian military to combat Boko Haram, the insurgence will be defeated.

He said Boko Haram can never be defeated without the use of Islamic war principles.

Here are some suggestions the right-wing Islamic scholar put forward yesterday in a chat with Daily Trust:

“Some of our gallant officers and men move into the theatre of war under the influence of substances.

“This is why immediately Boko Haram insurgents chant Allahu Akbar (Allah is Great); some of our soldiers would throw away their weapons and took to their heels. But if we have exclusively Muslims legions under the leadership of Imams, they will fight the war as Jihad.

“They will follow the principles of holy war and this insurgency would come to an end insha Allah. If Boko Haram chants Allahu Akbar, our soldiers, who know that they are fighting a holy war, would also chant Allahu Akbar and fight to the end.

“I think we should try this experiment so that this insurgency would be brought to an end. The turn of events in this Boko Haram war always amazes me. The way things are going can confuse any decent mind. Therefore, we must apply religious principles to fight this war.”