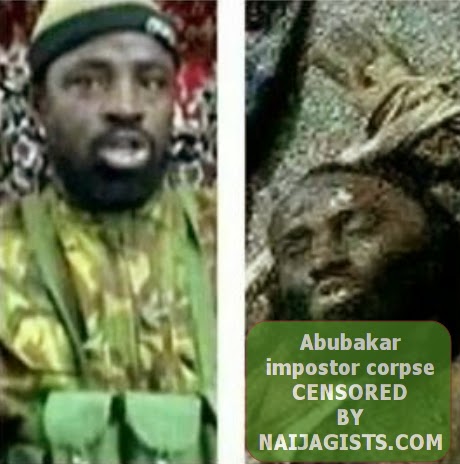 If the story coming from Konduga is anything to go by, then the guy that succeeded the late Boko Haram leader has been killed.

The picture above was taken by survivors of an attack carried out by the sect in Mainok.

Survivors of Mainok market attack said the terrorists are very mad as a result of the attack that killed their leader Skekau in Konduga on Wednesday, the 17th of September 2014.

The insurgent launched a rocket to the busy Mainok market on Friday killing over 300 people. Sources believed the attack is in response to the death of their leader.

Hear what a villager who identified himself as Modu Jakana told Tribune:

The insurgents came in from all angles, “shooting the people as if they were exchanging fire with the military. We don’t know how we escaped, but we were so lucky. They were so determined to kill everybody. I saw so many corpses while we were running for dear lives. At the main road, vehicles that were on top speed also killed so many people as there was confusion everywhere.

“This morning, some of our people told us that over 300 people, including some of the insurgents, were killed because we learnt that the military came and engaged them in a fierce fight.

“it is getting more certain that the terrorists’ commander who has been mimicking Shekau in those videos is the one killed in Konduga on September 17, 2014.”

Today, five Boko Haram members surrendered to the military. The terrorists who also gave up their RPGs plead for mercy and promise to reveal more information on the activities of the sect.