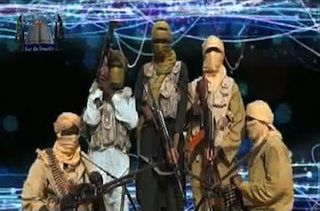 Nigerian troops battled militiamen in central Nigeria on Sunday after they destroyed several villages and killed scores of people last week, including six soldiers who had their eyes gorged out and tongues cut off, a military spokesman said.

The group is not part of Islamist militant group Boko Haram, Special Task Force spokesman Captain Ikedichi Iweha told Reuters, but he did not give further details on their identity.

“Tongues were cut off, eyes were gorged out, bodies were decapitated,” Iweha said of the soldiers killed in the April 28 attack that saw several villages on the border of the central states of Plateau and Taraba razed to the ground.

“Yesterday, contact was made with the militia group and a firefight ensued. It is still going on,” he said.

Iweha said he could not disclose what triggered the initial attack until the operation was completed.

A resident of the area said the army had killed 20 people in retaliation for the dead soldiers, who he said were murdered Saturday night. Those killed belonged to the Tarok ethnic group, members of which had allegedly engaged in cattle rustling.

“I saw people killed deliberately by the soldiers. Some ran to the river but could not escape. They were caught by the bullets,” Usman Sabo told Reuters.

Iweha denied the army had attacked the villagers.