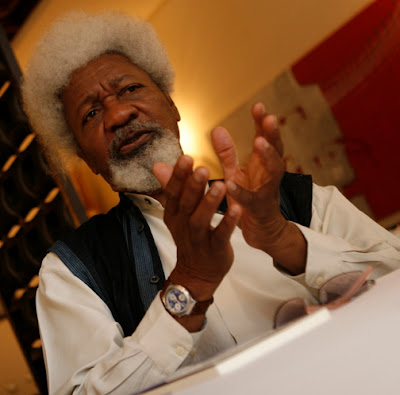 Prof Soyinka recently played the role of a wise elder when he urged the FG go apply tact in dealing with the renewed call for an independent Republic of Biafra. The agitations which smouldered under the leadership of Chief Raph Uwazuruike and his MASSOB gained altitude with the emergence of Biafra Radio ,powered by a young Nigerian, Nnnamdi Kanu, who chose the United Kingdom as his second home. Biafra has refused to be confined to the dustbin of History.

The name led Nigeria to a Civil War that claimed millions of lives and destroyed infrastructure worth trillions o Naira. At the end of the 31- month old crisis, the belief was that what led to the bloodletting in the first place would never be allowed to germinate in the future. Forty –five years after, the cries are all over the South-East and parts of the South-South-geo –political zones. Soyinka was part of the story of the war. There were fears that he had sympathy for the Biafrans simply because some of his friends found themselves on the other side of the divide.

Chinua Achebe, Emmanuel Ifeajuna and Chris Okigbo played active roles. The bonding spirit of the University College Ibadan, was so strong. Achebe did not go to the battle field with Rocket Propelled Grenades[RPG] and Small Machine Guns[SMG]. He was part of the Biafran Ministry of Information which could move mountains with words. Ifeajuna was part of the liberation of the Mid-West but was cut down by bullets on allegation of plotting to topple Col. Emeka Ojukwu, the Biafran leader. Okigbo was brave and joined the Army.

In an act that could earn a post humous medal, he tried to blow up a Federal Armoured tank with a grenade. He lost his life in the process. Soyinka did not fight in any of the major sectors but fight he did. He was detained by the General Yakubu Gowon government until the end of the war. While in jail, his father died and the writer was not allowed the tradition of burying his dad. It was in prison that he wrote The man died.

The Laureate therefore is in a vantage position to talk about Biafra and the way forward. His take is that anyone who believes that Biafra would be destroyed by sending a squadron of policemen to Onitsha, Aba , Port-Harcourt or Asaba should think twice. Prof. Soyinka’s alternative is dialogue in order to find out what the grievances of the agitators are and how to meet their demands even if halfway. His conviction is that Biafra cannot die. That is a salient point. The people who feel they do not want to be part of Nigeria anymore may change their minds if certain reassurances and guarantees were made.

And more should be done for the people of the South-East to feel they are part and parcel of the Federal Republic. This warning is timely. The nation cannot afford another Civil War. No nation has really survived two civil wars. Times are rough for our democracy as insurgency continues to ravage the North-East.

The economy is almost down on its knees and money meant for national development must not be wasted on another crisis down south. While we condemn any acts of violence from those who are free to make their points peacefully, we also advise that live bullets should not be used on innocent protesters and unarmed civilians.

The militarisation of the Sout –East should be discouraged. Nigeria cannot afford to fight on two fronts. Normalcy should reign in places where protests have been held. In Onitsha innocent citizens now live in fear because they are forced to raise their hands in surrender as they go through areas like Upper Iweka and Headbridge. Government while maintaining peace should also offer a hand of dialogue. The peace we enjoy in the Niger Delta today came because late President, Umaru Musa Yar’adua toed the path of jawjaw. That is the way to go and this is time to avert further crisis.

Continue Reading
You may also like...
Related Topics:biafra, wole soyinka