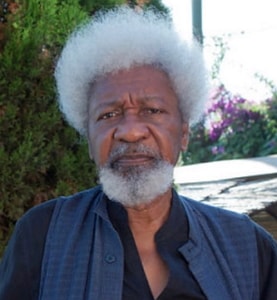 Prof. Wole Soyinka, has once again lashed out at former President Olusegun Obasanjo and his supporters. He alleged that the retired General’s supporters harassed and bribed the United Nations Educational, Scientific and Cultural Organisation (UNESCO) delegates to approve the Olusegun Obasanjo Presidential Library (OOPL) in Abeokuta, the Ogun State capital and give it a special status under the international body.

In his new book, titled; ‘Quis Custodiet Ipsos Custodes?: Gani’s Unfinished Business’, which was released to the public on Tuesday, Soyinka, who explained his role in letting the international body know that it was being hoodwinked over the real status of the presidential library, alleged that the ex-president’s supporters adopted the Nigerian ‘brown envelope’ method to lure the educational body into submission.

Soyinka also recalled how he warned UNESCO that its “reputation ran the risk of being besmirched if it succumbed to the importuning from that ex-president” but that he and his team could not match the overwhelming distribution of money used in bribing some UNESCO delegates and some Nigerian journalists, during a congress of the organisation in Paris, France.

“The development came as our ‘Divine Megadi’ (mai guard), ever on the hunt for international recognition, mounted a crooked campaign to have his institution accorded a special status under UNESCO’s categories… our permanent representative in UNESCO was ordered into action for the attainment of that objective.

“We lost that cause where and when it mattered, we were simply no match for the liberal receptions organised in Paris for UNESCO member states by the other side of the campaign, one that involved the lavish distribution of the Nigerian trademark – the brown envelope – to impoverished or simply accommodating Third World delegates, not forgetting the convoy of Nigerian journalists who were taken along from Nigeria on the sponsored junket.”

Let know one contradict me

Proving that he has his facts on the matter and that he is familiar with the inside dealings at UNESCO, Soyinka warned against being contradicted as he asserted that he had been with the organisation for decades and has become a veteran with his connections intact. “Let no one attempt to contradict me please, I am a UNESCO veteran, decadesold member, and even a one-term president of one of its associated bodies, the International Theatre Institute, with an office in the rue Miollis annexe of UNESCO.

I have retained my insider connections ever since”. According to extracts from the book, apart from losing at the international scene, the octogenarian activist also lost his bid to stop Obasanjo at the home front.

He narrated how a suit instituted by the late Chief Gani Fawehinmi had been lost through a preliminary objection raised by Chief Afe Babalola (SAN), who was the attorney to Obasanjo at the time.

“On the home front itself, we also lost the case against our watchman. A Federal High Court has thrown out the suit instituted by Lagos lawyer, Chief Gani Fawehinmi, challenging the proprietary of Obasanjo for establishing a presidential library and awarding the licence to himself while in office.

“Justice Stephen Adah, who delivered his ruling on the preliminary objection raised by Afe Babalola, held that: ‘The fact that Fawehinmi is a legal practitioner does not confer on him any special right or interest to challenge Obasanjo over the library.” “The court further held that Obasanjo is covered by the immunity clause under section 308 from any civil or criminal proceedings, adding that Fawehinmi lacked the legal right (locus) to sue the President. Besides, the court said it lacked the jurisdiction to hear the matter, as it was constituted.

Why we failed in court

Soyinka further explained that all efforts failed because the substance of the case was never debated but the peripheral arguments raged even when a similar petition was sent to the Code of Conduct Bureau (CCB) against the OOPL as well as The Bells University in Ota, believed to be owned by Obasanjo, with a view to revoking the licence of both institutions.

“The Lagos lawyer had after filing the case, proceeded to submit a petition to the Code of Conduct Bureau, asking it to seize the N6.5 billion realised at the fund raising ceremony for the president’s library. “He asked the Bureau to seize the licence given to Bells University of Technology (the university allegedly owned by Obasanjo), because it was obtained in contravention of the Code of Conduct and abuse of power and corruption in 2003.

“He urged the bureau to prosecute Obasanjo for the violation of the Code of Conduct for Public Officers. The petitioner had prayed the Bureau to allow journalists access to the declaration of assets and liabilities filed by Obasanjo in accordance with section 22 of the Constitution. “As any layman can discern from the judgment, the substance of the case was never touched. We placed ourselves on standby, ready to contribute our quota as witnesses, with relevant documentation, but of course were never called upon.

“We defer to the ‘learned brotherhood’ to argue the merits or demerits of that judgment, although we also class that case in the category of discharged, not acquitted”. “We are all however equal petitioners in the court of public opinion and ethical values.

As it happened, we were able to have our own taste of compensatory vindication when later on, in a mood of triumphalism, confident that the case had also been struck off in the court of public opinion, the same laundromat team – attempted to use that very institution, UNESCO to launder hefty sums in ‘organising’ the Black Nationalities Conference, scheduled for Brazil in November 2015”.

Labelling the edifice as a house built on fraud, Soyinka who once referred to Obasanjo’s alleged coercion of individuals to donate towards the building as executive extortion said the former president had continued to lament his fail bid to become the United Nations’ Secretary General.

He however said he has no regret stopping the former president from becoming the scribe of the world body, labeling Obasanjo a sadist and a liar. “Obasanjo never fails -even as recently as the 10th anniversary of the creation of his Presidential Laundromat early this year- to accuse me of blocking his ambitions to become Secretary- General of the United Nations.

“Well then, regarding that episode that still nettles the Watchman, could someone please persuade him to stop crediting me with that level of international clout? Of course, I feel totally content and fulfilled with my contribution to that operation to ‘save the world’ from the clutches of a predator, sadist and liar.

“That structure in Abeokuta remains a moral eyesore …When we were school pupils, one of our illustrated reading texts was one entitled: This is the house that Jack built. Today, and forevermore, generations will point to that thing which I have daubed the Presidential Laundromat and say: This is the house that Fraud built.” The Nobel laureate also dwelled on the allegations raised by a former governor of Abia State, Dr. Orji Uzor Kalu, where he accused Obasanjo of corruption and witch-hunting.

Recalling how Kalu had challenged President Muhammadu Buhari to probe Obasanjo in order to prove that the anti-corruption war is on course, Soyinka said despite the weightiness of the allegations raised by Kalu, the former president had neither denied nor challenged the issues raised in court. He referred to a letter written by the former governor as well as an open attack by Kalu at an APC dinner party in 2018.

“Kalu, remains Obasanjo’s most notable rival in the art of public letter-writing. It is open field, and one would have expected letter to speak to letter, Christian to Christian, Bible-thumper to Bible-thumper, Ezekiel to Galatians, while we stand on the side-lines for a spell, insisting only that even mildewed files must, where needed, be cleaned up and re-visited. “Again, we are also duty bound to point out that the author of that damning expose is himself standing trial on charges of corruption. We are aware that this pioneer letter-writer has been summoned by EFCC to substantiate his claims.

Now, whatever did happen to the summons? Has Orji Kalu recanted? Has he been charged with criminal libel? Has he been charged for providing false information to the security agencies? “Has he been directed to seek help from a psychiatrist? Now that the accused is seeking once again to lead the nation – directly or indirectly – these charges deserve to be formally addressed.

The message is persistent, unrelenting, refuses to evaporate. As recently this year 2018, the accuser reiterated his accusations, daring General Buhari to perform his statutory duty. Kalu threw the challenge at the quarterly public lecture series of National Institute for Cultural Orientation, NICO. Quoting Kalu, Soyinka recalled the statement of the former governor: “President Buhari has got some guts but he should arrest Obasanjo for us to know that corruption is forking.

Without arresting Obasanjo, he has not started fighting corruption because Obasanjo took away our $16million electricity money. So, unless he arrests Obasanjo, corruption is not being fought in Nigeria.” “This is strong stuff. Coupled with the actual 2005 letter written directly to Obasanjo by Kalu, and only released much later, we find ourselves confronted either by a man possessed by truth or obsessed by hatred and/ or thirst for vengeance for some deeply felt wrong. No matter, we must all play by the same rules – the message, not the messenger!”

The civil right activist did not also forget to refer to his relationship with the late Fawehinmi, in whose honour he had put the book together. While narrating how the duo had been incarcerated in the same prison during the civil war, Soyinka recalled how they had met in Kaduna prison and forged a common bond afterwards.

“Gani, many may have forgotten, was in Kaduna prison for a while during my own incumbency during the Civil War.

You also may have forgotten, but he was briefly detained without trial during that period, his crime being nothing more than appearing for a client whose wife had been abducted by one of your military colleagues. “He actually got a message to me in my solitary confinement – it was through one Abdulazeez, then on the editorial staff of the now defunct New Nigerian.

He had earned the displeasure of a sector of the military and was flung into detention. “Gani learnt that I was in the same institution, and we enjoyed a brief back-and-forth interlude of mutual morale-boosting, thanks to that young man.

“So you see, the bond between Gani and me goes back a long way, that bond which you so petulantly tried to trivialize by concocting a rivalry, an infantile fantasy that only reminds us that tawdriness of mind, wherever it has been implanted from birth, cannot be excised even through accession to the highest of positions, and conferment of immense responsibilities”.

Sheik Gumi: Buhari Believes All Nigerians Are Rascals, Thieves & 419, He Always Blames Others & Does Not Take Responsibility
Wild Jubilation As Obasanjo Attends PDP Rally Organized By In Law, Oladipupo Adebutu In Abeokuta