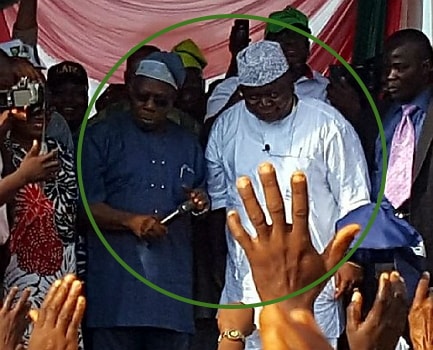 Adebutu, who is currently representing Remo Federal Constituency in the House of Representatives and his supporters were at the rally held within the Olusegun Obasanjo Presidential Library when the former President arrived in his Toyota jeep in a convoy of other cars.

This threw the supporters into a wild jubilation, as Obasanjo alighted from the vehicle.

The former President, who is also an in-law to the aspirant, said, “I am just passing by and decided to say hello and wish you well.”

Immediately he extended his pleasantries, he jumped into the jeep and he left with the convoy of cars in his trail to his residence situated within the premises.

Obasanjo had reiterated that he had quit partisan politics when he established his Coalition for Nigeria Movement, which later fused into the African Democratic Congress.

He, however, said his doors remained open for consultations by all Nigerians who shared his views of a united country.