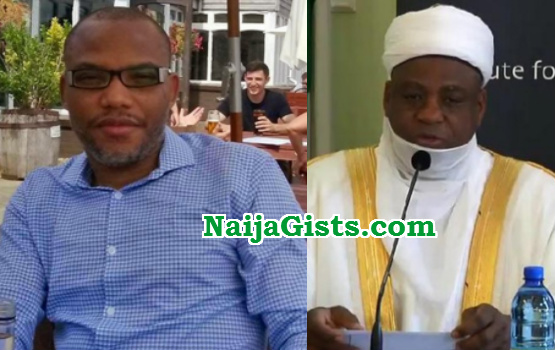 The Federal Government has arraigned the Director of Radio Biafra, Mr. Nnamdi Kanu, before an Abuja Magistrate’s Court over terrorism- related charges.

The court had, last Wednesday, ordered the Department of State Services (DSS) to produce Nnamdi in court unfailingly on Monday. At the resumed trial yesterday, the accused pleaded not guilty to the three-count charge slammed on him.

After that, the DSS asked the court to allow it file another charge bothering on terrorism against Kanu before a higher court. In the pending charge, Kanu is being arraigned on a three-count charge of criminal conspiracy, intimidation and belonging to unlawful society.

‘Moving the application for filing a fresh charge, prosecution counsel, Moses Idakwo, informed the court that after the arraignment of the accused, the complainant stumbled on some facts, which took the matter out of the jurisdiction of the court. He further submitted that the complainant found out that the accused was involved in terrorism and has been financing it.

It was on that ground that the prosecution applied for the discontinuance of the trial pursuant to Section 108(1) of administration of criminal justice act 2015.
The prosecution further informed the court that the DSS had obtained an order from the Federal High Court, Abuja, dated November 10, to detain the accused in its custody for 90 days.

However, counsel to Kanu, Vincent Obetta opposed the application and prayed the court not to discontinue the case because the prosecution did not present any information from the Attorney-General of Federation who had the authority to approve such.

He further submitted that the DSS violated the order of the court, which granted bail that was perfected but not granted, adding that the accused had been in DSS custody since he was arrested. After listening to the submissions of both parties, the trial magistrate, Mr. Usman Shuaibu, adjourned the matter till December 1 for ruling.

Meanwhile, the commercial nerve centre of Anambra State, Onitsha, was yesterday agog as members of the Movement for the Actualisation of the Sovereign State of Biafra (MASSOB) and Indigenous People of Biafra (IPOB) took over the streets demanding the release of Kanu. The members, numbering over 10,000 youths, marched through Onitsha Bridge Head to Upper Iweka through Borromeow junction to Nkpor old road under the watchful eyes of the Nigerian Police and other security operatives.

They carried placards with inscriptions such as “Release Nnamdi Kanu or we are ready to die.” Also, thousands of protesters trooped to the streets and shut down business activities in Aba, Abia State yesterday.

The protesters carried placards with inscriptions: “The mass protest is not for marginalisation, we are not Nigerians,” “All we are saying, give us Biafra.” The markets, especially Ariaria International Market, were shut down as traders joined in the protest, which they said was for the unconditional release of Kanu.

Comrade Nnamdi Igwe said the protest was to drum into the ears of the Federal Government and the judiciary that both MASSOB and IPOB should not be taken for granted. He warned that all the necessary documentations must be completed to ensure that Kanu is brought to court.

In a related development, the Sultan of Sokoto, Alhaji Muhammad Sa’ad Abubakar yesterday expressed concern over the agitation for the actualisation of Biafra in the South- East by some groups.

Speaking at the 2nd General Assembly of the Northern Traditional Rulers’ Council in Kaduna, Abubakar said: “We are very much concerned about this issue because we know we have millions of Igbo residing with us in our homes, in our towns and in our states.”

According to him, the Igbo that are living in the north “are very peaceful, very industrious and are helping our communities and helping our economy to grow and so many of them as we know, keep telling us that they have nowhere else to live than where they are presently living.”

The Sultan commended some of the Igbo leaders and governors who condemned the agitation. “We believe in dialogue, whatever the problem is with anybody, we believe we should sit down and discuss and a solution will be found,” he said.

The paramount traditional and religious leader also asked the Northern state governors to find out the whereabouts of the billions of naira donated for the Internally Displaced Person (IDPs). The Sultan promised that the issue would be discussed extensively when the meeting goes into a closed-door session.

He lamented that “people are suffering, billions and billions of naira has been collected or put aside for their welfare, but what we hear everyday and what we see on the pages of newspapers is very bad.

It is important that this money be disbursed immediately via the state governors.” According to him, “the billons of naira collected must be utilised now because when somebody dies, he does not need anything again except prayers. So, since they are still alive, lets feel for these IDPs; they are our brothers and sisters.
We must feel for them.’’