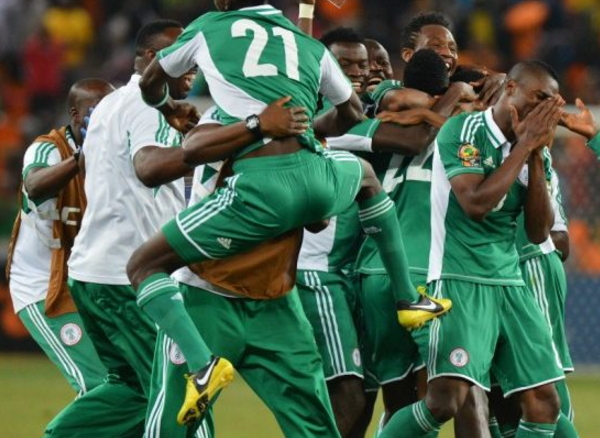 The Nigerian Super Eagles have won an estimated amount of N15,000,000(Fifteen Million Naira) after defeating the Indomitable Lions of Cameroon 4-0 at the Godswill Akpabio Stadium, Uyo, on Saturday.

Governor of Akwa Ibom State, Udom Emmanuel had promised 10,000 dollars for each goal scored by the Eagles in the 2018 World Cup qualifier. And the four goals in the match have fetched Super Eagles Captain John Mikel Obi, Odion Ighalo, Kelechi Iheanacho, Victor Moses and their teammate 40,000 dollars.

As gathered, the Governor had already redeemed a 30,000 dollars he pledged for the tie against Algerian which the Eagles won 3-1 also in Uyo.

Odion Ighalo opened the goal for the Super Eagles in the 32nd minute as converted a fine pass and buried it into the bottom right of the Cameroonians’ goalkeeper to hit the net. And barely 10 minutes later John Mikel Obi who man the midfield also registered his name on the score-sheet with his trade side kick shot from a corner kick taken by Victor Moses.

Cameroonians made tactical substitution and began the second half stronger in search of goals but they were caught napping in one of their several counter kick through Moses who made a dashing run into the vital area of the visitors.

He gave the pass to Moses Simon in the right hand flank of the pitch close to the 18 yard of the Indomitable Lions before returning the pass to Moses who played an angular shot into the left corner of the goalkeeper for the Eagles’ third in the 55th minutes.

There was still time for the fourth goal in the 76th minute through Kelechi Iheanacho
Ighalo left the pitch in the 60th minute for Kelechi Iheanacho having endured several innocuous kicks from the Cameroonians while John Mikel Obi was also removed in the 68th minute for Mikel Agu to make his official debut for Nigeria.

The Eagles clung onto the lead to open up a seven point gap between them and the Cameroonians as they are now on nine points at the top of the Group B while Cameroon is second on two points from three games.

Zambia and Algeria will slug it out today in Ndola in the group’s other match.