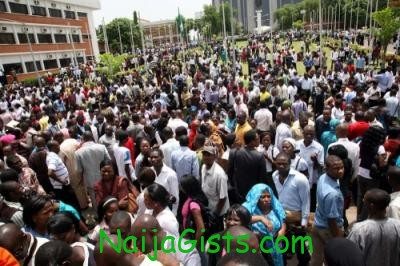 According to a recent Gallup poll conducted among Nigerians, it has been revealed that 94% of those questioned believe that the government is corrupt. naijagists.com

Perhaps this figure explains why Nigerians came out en masse to protest and show their displeasure when the federal government announced the removal of the fuel subsidy, around the time the contents of the 2012 budget revealed excessive amounts budgeted for frivolities.

According to the experts, Nigerians do not trust the government and so, disbelief the promises that the savings from the fuel subsidy would be used to create jobs and provide infrastructure.

The aftermath of the eight day strike that brought the country’s economy to a halt is still being felt.

There are still long queues at filling stations and the soldiers deployed across the country by the government are still on the streets and the FG has said that they will not be returning to the barracks immediately.

Story of The Day: Dating A Nigerian and Proud Of It
HunchBack Murdered For Money Ritual in Ondo State