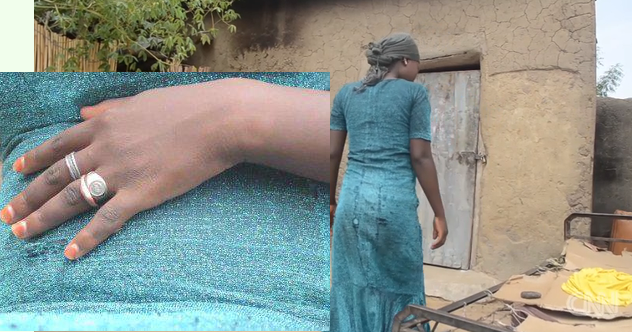 Pictured above is a one of the girls kidnapped by Boko Haram in Borno state recently.

The 16-year-old was later turned into a sex slave by her captors before being forced to marry a terrorist she hated.

Um Haleema was captured along with 3 of her friends after Boko Haram burned down and destroyed their village.

During her captivity, Um Haleema was forced to watch men, women and children slaughtered. She was forced into marriage. Forced to wait on a “husband” she hated. But while she watched, she says she was also waiting — for a chance to break free. And after six long months, it finally came.

“I had planned my escape from the beginning, “There was a time my husband spent two weeks away, so I attempted to escape but guards returned me and beat me.”

Eventually, her captors’ vigilance began to slip and she managed to escape.

She returned home only to learn that the terrorists have killed her father.

Haleema said villagers have ordered her to have an abortion or leave the village but she has rejected their offer.

Continue Reading
You may also like...
Related Topics:boko haram, victim