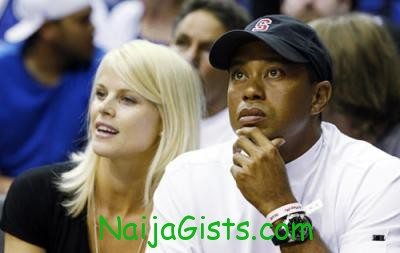 While Tiger Woods may be resurrecting his golf game after scandal, heartbreak, and a lot of drama, his bank account could be getting a real beating. naijagists.com

Confirmed reports say the famous athlete might be parting with $100 million dollars in a divorce settlement that has the markings of one of the most expensive split ever. In fact, TMZ says that this hefty amount is even more than Tiger’s prenup with his now ex-wife.

The entertainment news site thinks that perhaps the raise in divorce pay is because Tiger Woods wants to put a lid on his life with Elin Nordegren.

Still, things could be worse for the golfer who is just now getting his game back.

When the couple first announced information about their settlement, reports spoke of a figure that was hitting $700 million.

According TMZ announcement, “Tiger Woods’ soon-to-be ex-wife is about to become an independently wealthy woman, but we’ve learned she’s legally prohibited from blabbing about it.”

And so with that said and with a lot at stake, Tiger Woods may be facing a $100 million divorve settlement, setting one record he probably never even envisioned would be part of his life’s bounty. (tmz)