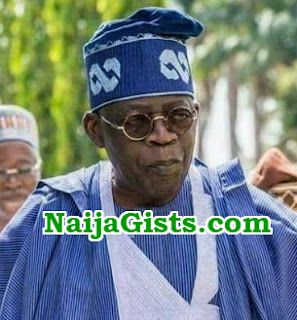 APC National Leader, Bola Tinubu today lamented the ills that had befallen Nigeria, saying the country has now become a cruel playground where the average person is exploited and his interests never promoted.

Speaking at the 15th Annual Daily Trust Dialogue, the former Lagos State governor, said it is unfortunate that despite the sacrifice that had been made in ensuring good governance for all Nigerians, too much political and economic power still resides in few hands.

Tinubu, who was represented by a one-time Commissioner for Finance in Lagos State, Wale Edu, said Nigerians must resist all appeals to unthinking passions and old prejudices and adhere to what our conscience reveals as the best path to good governance for all.

“For me, that path has always been a progressive one that harks to the need to materially transform the power relationships upon which this political economy is based. Despite the progress made, too much political and economic power resides in the hands of too few. This result in a society described by too much unemployment, inadequate infrastructure, too little food, yet too much poverty.

“For the debate needed on how best to tackle these structural problems, 2019 must not be a game between players similar in every way save the political party costume they wear. The election to come must be a contest of different visions for the nation’s present and future.

“As a progressive, I believe we must transform the nation by embarking on deep and impactful reforms, by creating more jobs, providing social policy initiatives and building an infrastructure befitting a leading nation. Social services must become a reality close at hand and not a vague dream lying in the distance.”

Tinubu, who spoke on the topic “Nigeria and the challenges of 2019: This is not a game,” said too many of us for too long have treated politics as a game open only to an elite, exclusive club of players. The nation and the people constituted the pitch upon which the game would be decided.

“This incorrect mindset has misshaped our politics and injured the nation in ways mundane and profound. Approaching nearly 60 years of independence, Nigeria remains a complex yet incomplete work of art, a project as much on the drawing board as it is our daily reality. For too many, Nigeria itself is a game. They are not wedded to the idea and ideals of Nigeria as a diverse and democratic but unified nation.

“They see the nation not as object of loyalty but as the most available platform to realize their personal aims. In their minds, Nigeria is lesser than their ever expanding ambitions. Because they view Nigeria as a game, their politics is but a game within a game.

“Instead of being a joyous nation, we have become a cruel playground where the fears and concerns of the average person get exploited but their interests never get promoted.

“While democratic politics inherently bear aspects of competition and contest, it must never be reduced to a mere game. The objective of a game is served by the mere playing of it. Playing the game is an end in and of itself.

However, this cannot be the case with politics and elections. Winning the political contest can never be an end in itself.

“The proper outcome of electoral victory is not for the victor to revel at his good fortune or his skill in electioneering. The inevitable sequel to an election is for the winner to assume the sobering burden of governance. Elections are not the climax of an epic book. They are merely the close of the book’s opening chapter.