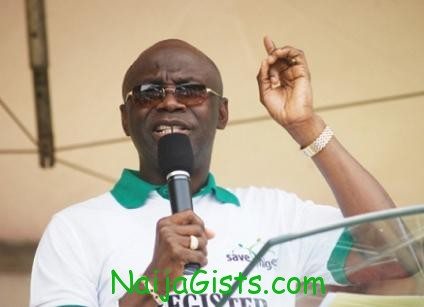 He argued that if subsidy removal was allowed, Nigerians will be made to pay for government’s ineptitude.

The cleric noted that government had caused confusion in the country following its resolve to go ahead with the subsidy removal “without due regard for the feelings and sufferings of a people being pushed to the wall.”

He said: “Fellow citizens of Nigeria, by removing the subsidy, if we ever allow this to take place, Nigerians will be made to pay for the ineptitude of their leaders and the kleptomania of government functionaries. Like other nations, some less endowed, we have the opportunity to set up our own refineries, refine our products, sell and export refined products and make money.

”Instead of doing that, NNPC and the government explore sleaze, refine roguery and market sharp practices. They cannot complain that they import at a high price. It is their idiotic choice and Nigerians should not be made scapegoats for their poor choices.”

Bakare, who is also the Serving Overseer of the Latter Rain Assembly, lampooned successive governments for failing to “explain why the refineries have remained incapacitated despite humongous investments over the years on Turn Around Maintenance,TAM.”

Speaking further, he said “Nigerians at home and abroad, young and l, must stand against he removal of this absurdity called subsidy, so that the government can be compelled to look inward and stop fleecing the poor people of this nation.”

In addition, he berated government for failing to tell Nigerians the truth regarding the fuel subsidy just as he stressed that the current price of petrol in the country is not the lowest in the world.

“The Federal government of Nigeria does not tell the whole truth each time it trumpets and blows its propaganda machinery that the present N65 per litre we pay for petrol is the lowest in the world. Put side by side with the cost per litre in other oil producing nations, ours is one of the highest,” he argued.

Continuing, he said “this oil subsidy saga to me is the proverbial handwriting on the wall and this government has taken the toga of Rehoboam, the son of Solomon, to further concretise the suffering of our people in the midst of plenty.

Rehoboam though he could continue the profligacy of his father, but the people that were pushed to the wall, kicked back because they could comprehend why their nation had everything but the citizens paradoxically lacked everything.”

While reiterating his resolve not to support government’s plan to remove the fuel subsidy, the fiery preacher said “until this government downsizes, cuts down on its profligacy, and leads by example in modesty and moderation, the poor people of this country will not subsidize the excesses of the oil sector fact cats and the immorality of the self-centred and indulgent lifestyles of those in government. No leader can survive for long in power without peace. And let no one dream of peace without justice and equity.”(vanguard)

One Killed, Others Injured As Car Plunges into Lagoon
Boko Haram: We Lost 3 Members, Many Are Still Ready To Die