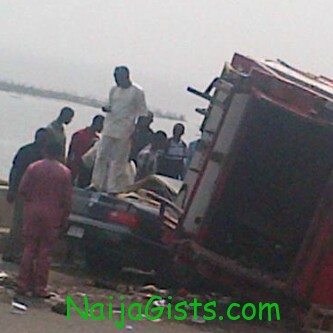 One individual was killed instantly while another fatally injured in an auto crash on the Third Mainland Bridge, yesterday. naijagists.com

The accident, which happened about 11 a.m, also left  one of the vehicles, a Honda Acura Legend saloon car, damaged beyond repair.

The car was heading towards Oworonsoki end of the bridge when the accident occurred.

According to an eyewitness account, the driver of the Honda, who was reportedly on top speed, lost control of the car which somersaulted severally before slamming into the railing on the bridge.

The driver was said to have plunged into the lagoon, while his female companion died instantly.

It was learnt that the car, fell on the dead passenger, whose body took quite some time to retrieve.

However, another account said the car somersaulted severally after colliding with a LAWMA truck. Both were said to be heading in the same direction.

One of the front tyres of the LAWMA truck obviously pulled off as a result of impact of the collision, even as the front of the vehicle was also damaged.

According to account, the driver of the car, who was flung into the lagoon, was rescued by some good Nigerians, who rushed him to the hospital for treatment, even before the arrival of the state rescue team.

The remains of the dead female passenger, Vanguard learnt, had been deposited in a public mortuary in the metropolis.

At exactly 12:45pm, both vehicles were seen being towed in opposite directions by LASTMA officials.  While the Honda car was being towed towards Oworonsoki, the LAWMA truck was moved towards Obalende (vanguard).