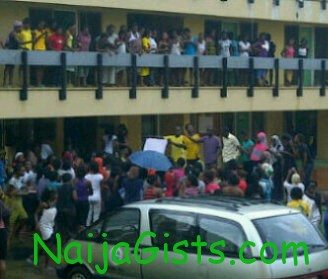 President Goodluck Jonathan renamed the university, founded in 1962 on two campuses, after the winner of the June 12, 1993 presidential election in his Democracy Day broadcast this morning.

Jonathan, whose first year in office had seen his public approval rating dip, said the roles of Abiola in the enthronement of democracy cannot be wished away saying the labour of our heroes past must be rewarded.

Abiola died on June 8, 1998 after being incarcerated for his insistence to reclaim his June 12 mandate.

Former Nigerian leader, Olusegun Obasanjo refused to name any major public institution in memory of Abiola who hailed from Abeokuta like Obasanjo.

She told the Nigeria Politics Online in a telephone interview: “It is honour well deserved. We should just remember that his commitment was to end poverty. That was what he was fighting for. It’s honour for him and those who fought with him.”

Is this necessary ? Mr Goodluck find something better to do jare !