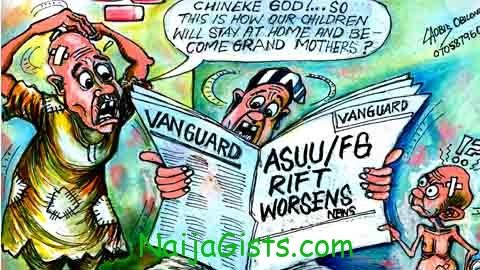 Here is the latest news on ASUU strike in Nigeria for our Nigerian University student fans.

According to the Academic Staff Union of Universities (ASUU) National President, Prof. Ukachukwu Awuzie,  the union is still talking with government on the resolution of the crisis that caused the indefinite strike which has crippled academic activities in public universities across the country.

“Well, some proposals have been made and we are still talking, something is happening. The main issue is funding. Government is looking for money to fund the university system”, he told Education Vanguard in a brief interview on Tuesday. naijagists.com

On the 70 years retirement for academics on professorial cadre as demanded by ASUU, he said this is secondary because, “it’s the sacrifice academicians will make as retiring at 65 years still make them to earn their salaries and entitlements for life”.

He continued: “The main thing is the decay of infrastructure, laboratories not there. The problem is lack of laboratories, workshops, classrooms, libraries, hostels and so on conducive for learning which are in deplorable state and govt will need funds to upgrade these facilities in order for our students to compete with others in the world”.

Awuzie said Nigeria can’t be there and take its place among other universities in the world if there are no facilities for teaching and research.

On how long that the strike will last as ASUU action is never an overnight thing, the national president said: “The strike is not a tea party and so we expect that government is working towards resolving the dispute. At this time and level, things should be faster so that the issues are settled”.

Also lending a voice, Dr. Karo Ogbinaka, the Chairman, ASUU-UNILAG, in a press conference held recently by his chapter said that government should stop treating the governing councils of universities as parastatal that can be dissolved at will.

He said that the absence of governing council in all federal universities is affecting the expected dialogue between FG and ASUU, adding that if nothing is done it may spell doom for the country.

Ogbinaka said that government’s dissolution of governing councils of universities immediately after the warning strike was done in bad faith.

According to him, the dissolution of councils of federal universities has affected the administration of universities in the country, especially on the need to resolve the crisis in the system because government can only discuss through Council members.

The don also tasked government to appoint persons who are capable of attracting funding to universities and not politicians who see themselves as contractors to the various universities where they were appointed.

ASUU, he said, is asking for adequate funding of university education and not adequate payment of lecturers, stressing that when the system is well funded it would attract best brains around the world.

Also reacting, Dr. Jimoh Abayomi, Secretary, ASUU-LASU said FG will usually not take things serious due to the festive seasons. But during the new year they may come out with full seriousness to treat those core areas of our demands.

The Senate committee on education under the leadership of Senator Chukwuemeka Chukwumerije had recently met with ASUU.

“However, our core areas of demands remains the university funding, 70 years retirement age for members in the Professorial cadre and the creation of Research and Development units. We are not agitating that FG should implement one or all before we can suspend the strike, but what we are saying is that if only the government will show seriousness towards the implementation of these core demands, then ASUU is likely to suspend the strike”. “FG should stop coming on air to make empty promises to Nigerians”, he enthused.

A 4-year course can take as long as 7 years to complete in Nigeria. When o when will this be over.

The Way Out Of Bombings By Oluwarotimi Akeredolu, Activists, Others
Attempt To Burn Down Church Foiled in Bayelsa State