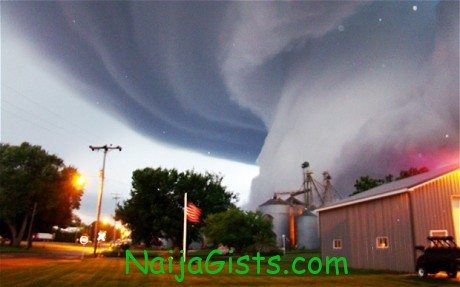 The powerful storm system stretched from the US Gulf Coast to the Great Lakes in the north, in the second deadly tornado outbreak in a week. naijagists.com

The twisters splintered homes, damaged a prison and tossed around vehicles across the region, leaving at least 14 people dead in southern Indiana, another 17 in neighboring Kentucky, three more in Ohio, and one in Alabama, officials said. In all, the latest line of storms battered a band of states from Ohio and Indiana on southward to Alabama and Georgia.

“We are no match for Mother Nature at her worst,” Indiana Governor Mitch Daniels said in a statement, adding that he would visit the stricken southeast corner of the state on Saturday.

Aerial footage from a TV news helicopter flying over Henryville showed wrecked houses and a mangled school bus protruding from the side of a one-story building overturned trailers.

In the birthplace of Kentucky Fried Chicken founder Col Harland Sanders the high school was destroyed and the second floor had been ripped off the middle school next door.

The outbreak comes two days after an earlier round of storms killed 13 people in the Midwest and South.

“It just hit all at once,” said Blaine Lawson, 76, in Cleveland, Tennessee. “Didn’t have no warning really. The roof, insulation and everything started coming down on us. It just happened so fast that I didn’t know what to do. I was going to head to the closet but there was just no way. It just got us.”

The storm system was so wide that an estimated 34 million people were at risk of severe weather, according to the National Weather Service regional office.

“Then the gates of hell opened up,” an emergency services call dispatcher told The New York Times.

In Indiana, Gov Daniels said that workers were desperately searching through rubble in search of anyone trapped, adding, “our people are racing the nightfall”.

The town of Marysville, home to 2,000 people, was reported to be nearly flattened.