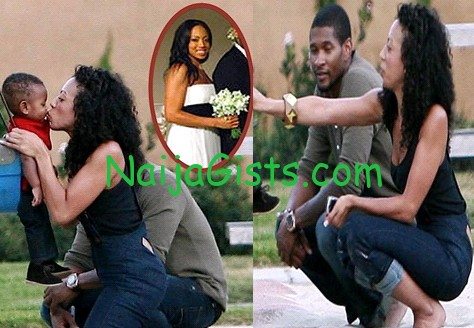 In an interview with Oprah Winfrey, American rapper Usher Raymond admitted he cheated on his former wife, Tameka with her bridesmaid, Maya Fox Davis. naijagists.com

However, he claimed it didn’t happen until after their separation.

On The Crash Of Usher & Tameka’ Relationship

Usher admits there were a ton of people against their marriage from the onset. But there were also a ton of people FOR their marriage, he claims. They tried counseling, charging their friends with helping them stay together, he publicly defended her on that now infamous “TRL” episode, etc. But none of it worked and mostly due to the pressures of being a Hollywood couple–neither were ready for everything that came with it.

After a long explanation, he finally said No. Usher said he confided in other women emotionally about his ups and downs, but while he and Tameka were separated, he indeed had intimate relationships with others. He said he was “lost” during this time.

On Whether He Slept with Tameka’s Bridesmaid

Usher openly admitted this was true–in so many words. He explained he and the bridesmaid were friends for a long time and she had been in his sons life since the beginning. He claims it occurred “after the marriage”

Watch the interview video below.

Shocking: Woman Discovers Her Late Husband Was Her Father
7Up Manager, Sola Mosiko Dies In Hotel Room After Sex-Romp With Co-Worker